Sun Broadcast Group has added eight new affiliates to the Shazam for Radio program. The service, which offers branded user experiences for radio stations within the Shazam app, already used by more than 1,000 channels owned by the major radio groups. END_OF_DOCUMENT_TOKEN_TO_BE_REPLACED

Global Interactive Media has gone on a tear of lawsuits on charges that several broadcasting companies have violated its patents. That intellectual property covers an “apparatus and method to generate and access broadcast information.” At this stage, it seems possible that the Belize-based company is looking to make money by pushing litigation over patents of questionable validity. But if the patent claims are legitimate, it could mean one more set of royalty payments for many types of audio companies. END_OF_DOCUMENT_TOKEN_TO_BE_REPLACED

Shazam has moved into the broadcast realm thanks to a partnership with Southern Cross Austereo. The parties have created a nightly show called Shazam Top 20 that will count down the most-tagged songs in Australia. According to the press release, fans who have the Shazam app on their phones will be directly influencing the charts. Calling the arrangement “a world-first,” Shazam’s APAC Sales Director Steve Sos said that the fan-guided radio show was a natural extension of the sound-identification app’s service. END_OF_DOCUMENT_TOKEN_TO_BE_REPLACED

Today RAIN is excited to bring you video coverage of Kurt Hanson’s State of the Industry Address from RAIN Summit Chicago 2011. In the video (embedded below), Hanson argues that we’re not only entering a fourth golden age of radio,… END_OF_DOCUMENT_TOKEN_TO_BE_REPLACED 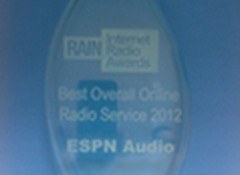 Continuing our coverage of RAIN Awards semi-finalists, today we reveal those entrants advancing to the next round for the “Best Streaming Broadcaster.” We’ll present the fourth annual RAIN Internet Radio Awards on September 17 at RAIN Summit Orlando. So far… END_OF_DOCUMENT_TOKEN_TO_BE_REPLACED