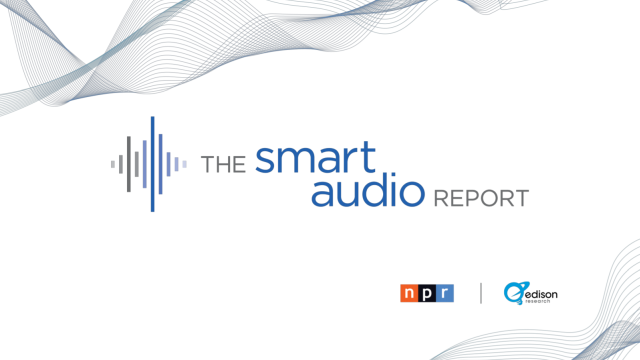 This is the third major release of the project which began in 2017 (and was debuted at the RAIN Podcast Business Summit that year). It measures how many people have embedded voice-controlled “smart” devices in their digital lives, and how they are using the technology.

“The latest data suggest we’ve moved into a maturation phase in this space, in which earning and maintaining the trust of potential smart speaker buyers, while also demonstrating new functionality, may be a key to continuing dynamic growth,” said Joel Sucherman.

“If she [Alexa] was human she’d have a toothbrush. We’re not in the courting stage anymore.” –Smart speaker user, Edison qualitative research video

“The only limit to these devices is your imagination.” –Tom Webster, SVP, Edison Research

The report specifically asked about interest in the slate of smart speakers with screens. Within existing device owners, 69% don’t have any models with screens. About a quarter (27%) have devices with and without screens, while just 4% only had screen models. The survey participants who do own a smart speaker with video ability were asked about the benefits of the screen. Two-thirds of them (66%) agreed that the screen made it easier to discover new content and that a screen made the device easier to use.

Even though smart speakers are no longer brand new, 69% of the survey participants said they don’t know enough about their device to use all of its features.

When asked about their most common uses, music topped the list of top ten weekly smart speaker requests with 77%. Getting the weather was 75% and answering a general question was 74%. Listening to AM/FM radio was in the lower bunch of results with 37% of the responses. Just over half of the respondents (55%) agreed that they are listening to more audio since getting a smart speaker.

The report also investigated interest in non-owners becoming owners. Among the respondents who do not own a smart speaker, 43% said they are not at all interested in acquiring one. Sixty percent of people who don’t have a smart speaker agreed that they didn’t need that tech in their lives.

While smart speakers are the front-facing devices for voice activation, smartphone platforms also have smart assistants — Google, Apple, and Samsung among others globally. NPR/Edison asked the crucial question of whether people cross over to their phones for voice-activated intelligent assistance. Perhaps predictably, smar speaker owners cross over more than non-owners. but even though the non-owner number is smaller, it is still over half of people who take advantage of this technology without investing in new devices:

The reasons why people who are interested in smart speakers haven’t made the purchase yet have shifted over time. Concerns about hackers were the top reason in 2019 at 63%, compared with 41% in 2017, and worry about smart speakers always listening was the second issue at 55% in 2019 and just 36% in 2017. Two years ago, the high cost was the leading barrier to ownership, although it continued to give respondents pause: the rate was 60% in 2017 and 53% in 2019.

A few other noteworthy bullet points from the survey: