RAIN has been tracking Triton Digital’s monthly Webcast Metrics Top 20 Ranker for more than 10 years, starting in September 2009. Looking back to that Ranker, we see that Pandora’s average number of active sessions (AAS, which RAIN uses as a governing metric in the Mon-Sun, 6am – midnight chart) was 147,673. That number was just a notch lower than CBS Radio’s 148,668 average number of streams. And that was the last time a traditional broadcaster held the lead position in the Ranker.

Pandora broke one-million average streams in December, 2015, and two-million in November, 2017. The pureplay online streamer dipped below two-million in July, 2018, and has bobbed around the 2M milestone since then.

Spotify joined the Ranker as a Triton client in January, 2015, and remained in the service for four years. During that time it rocketed up its listening from 687,702 average streams to 2,535,697 streams, nudging Pandora into second place in the Ranker for the whole of 2018.

Stream listening was level in December compared to November. The year-over-year view showed a 3% gain after removing Spotify’s metrics from December 2018.

Here are RAIN’s leader trendlines from Sep. 2009 through December 2019: 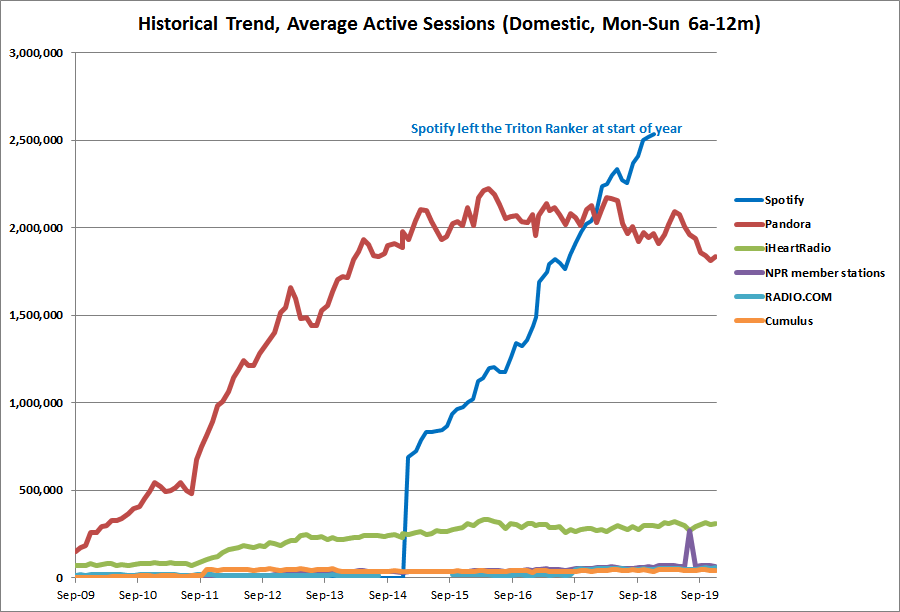 (We are leaving the Spotify line in place through 2019 as an important part of the 10-year RAIN/Webcast Metrics record.)