BitTorrent announced plans for a limited streaming service in June, but that experiment appears to have been short-lived. The company has reportedly shut down the BitTorrent Now streaming operation, sources told Variety. The business also fired the co-CEOs it hired back in April, Robert Delamar and Jeremy Johnson, and laid off an unknown number of other staff members. END_OF_DOCUMENT_TOKEN_TO_BE_REPLACED

BitTorrent has added a streaming component to its bundle program. The entire system has been rebranded as BitTorrent Now, and is available as an Android app (iOS and Apple TV versions are coming soon). The ad-supported streaming will only be composed of content that artists have chosen to make available for that purpose. END_OF_DOCUMENT_TOKEN_TO_BE_REPLACED

BitTorrent drew attention for its collaboration with Thom Yorke, where it made the Radiohead frontman the first artist to sell a pay-gated torrent of his new solo album. The company announced today that the direct-to-fan Bundle approach can now be used by any artists. The pay-gated platform’s opening was linked with an anniversary album release from DJ and producer Diplo. END_OF_DOCUMENT_TOKEN_TO_BE_REPLACED

Spotify’s director of economics, Will Page, spoke at the Bigsound conference in Brisbane, Australia, about the impact of legal streaming services on piracy. His data showed that, in the year from December 2012, the volume of BitTorrent files downloaded by Australians dropped by more than 20%. Spotify launched in Australia on May 21, 2012. Since then, he said one in six Aussies have tried out the music service. END_OF_DOCUMENT_TOKEN_TO_BE_REPLACED 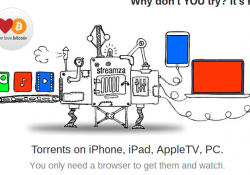 There are two big differences between Napster-style file-sharing and subscription music streaming like Rhapsody and Spotify. The first is that unauthorized file-sharing is, you know, unauthorized. Ad hoc sharing on peer-to-peer platforms infringes copyright, harms musicians to some degree (to… END_OF_DOCUMENT_TOKEN_TO_BE_REPLACED