Podtrac released its monthly Top Podcasts ranking for May, among Podtrac-measured shows. NPR appears most often, as owner of seven shows. iHeartRadio has three of the top 20.

Barstool Sports has a robust performance on this month’s chart, placing two shows.  One of them, Call Her Daddy, a raunchy chatcast, moved up 11 spots to #4. The show revived its feed in May after a five-week hiatus in the wake of what the New York Times called a “feud” between the show’s two stars. The Times reported that Call Her Daddy generated 35% of revenue for Barstool Sports. In a revelatory comeback podcast in the feed, Barstool president and show founder David Portnoy explained the blowup from his perspective, and mentioned that the show’s two hosts, Alexandra Cooper and Sofia Franklyn, was each earning over $400,000 per year.

Back to Podtrac. the #1 show in May, measured by U.S. unique monthly audience, was The Daily from the New York Times. The top three shows (The Daily, NPR News Now, Up First from NPR) maintained their 1, 2, 3 placements from April. 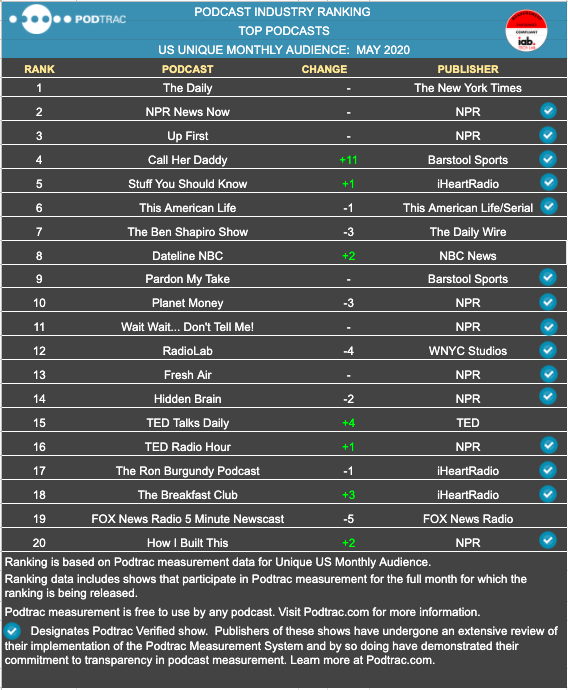