The Mechanical Licensing Collective (MLC) has received $424-million in royalties from Apple, Spotify, Amazon, Google, Pandora, and 15 other streaming entities from Aspiro to Xandrie. With funds received, the MLC starts pairing the cash with correct recipients among the global body of songwriters, composers, lyricists, and music publishers.

The MLC was formed after the 2018 passage of the Music Modernization Act (MMA), legislation which mandates methods of solving the tangled complexity of music ownership and royalty rights for the creative side of the business. MLC launch was at the start of this year.

There exist two basic ownership categories in music: the recording and the composition. Those two categories devolve into five royalty streams, creating a baffling marketplace for musicians, stakeholders, and the streaming services which distribute music. Creators (especially indie operators) often are incompletely registered to receive all the money they have earned from digital streams, and in those cases streaming services cannot match their catalog recordings with complete ownership information.

These knowledge and payment gaps are particularly troublesome on the creative side — among songwriters, composers, and the music publishing companies which can represent them. Streaming platforms like Spotify and Apple historically put the money aside in a cache. Unpaid money is what motivated creation of the Music Modernization Act, which includes a mandate to launch a collection agency (the MLC) tasked with taking those caches and determining who gets what. At the heart of that effort is a public database and registry.

The MLC is governed by a Board of Directors comprised of songwriters and representatives of music publishers.

Below is a breakout, by digital service provider (DSP), of the money sent to MLC: 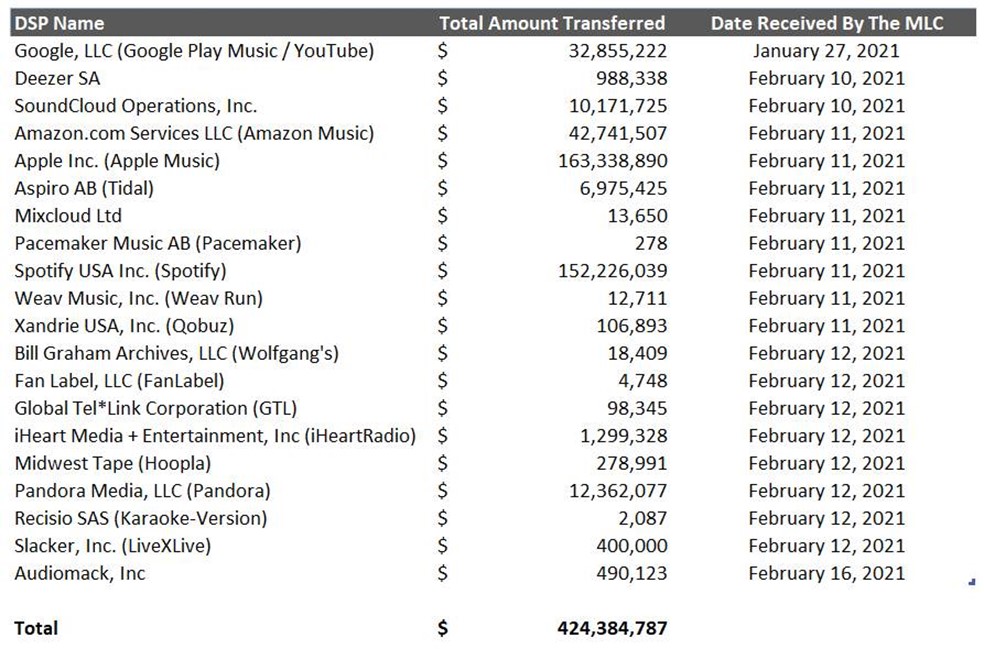