We’ve seen lots of research exploring the burst of interest in podcasts. The Infinite Dial 2020 results shows just how much the audio format is growing in popularity in the U.S.

The headline metric is illustrated below: Over 100-million Americans (12+) are monthly podcast listeners. That’s a benchmark absolute number, representing 37% of the population. “Certainly a medium to take seriously for advertisers, for the public,” observed Tom Webster, senior vice president of Edison Research, during the webinar sharing the results. 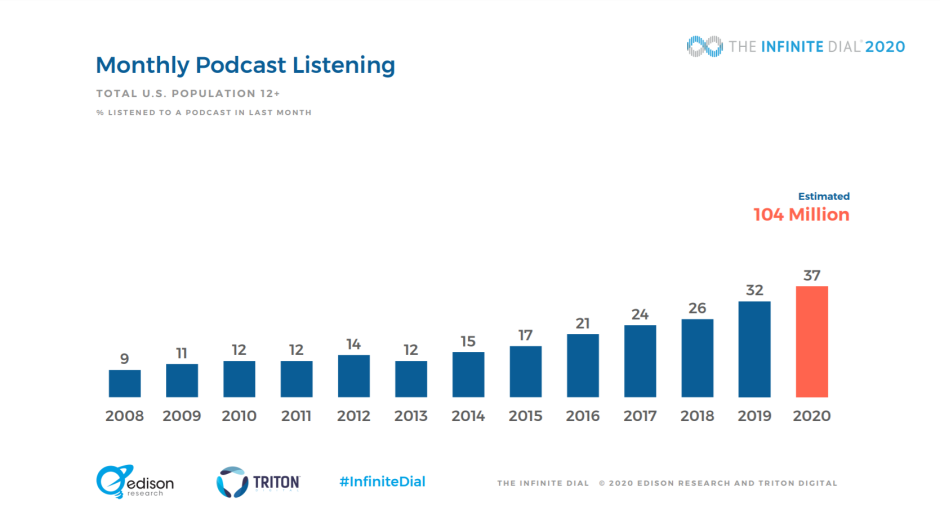 Three-quarters of the total U.S. population is now familiar with the term podcasting. That’s a potential audience of about 212 million people. The figure jumped from 70% familiarity in 2019 and 64% familiarity in 2018. “The term is absolutely getting into the zeitgeist,” Webster said.

An estimated 155 million people in the U.S. population have ever listened to a podcast. That’s 55%, up from 51% last year. More than a third (37%) of the U.S. population said they had listened to a podcast in the past month. The monthly podcast consumer group grew 16% from the previous year, and 2020 marks the first time that audience surpassed 100 million Americans.

In exploring the monthly audience demographics, some notable trends appeared. Men have long been more likely to listen to podcasts, but women are reaching a closer percentage. In the 2020 results, 39% of men and 36% of women said they had listened to a podcast in the past month. The audience does still skew younger, with 49% of the 12-34 age group, but 40% of ages 35-54 and 22% of ages 55+ also identified as monthly listeners. Those figures marked increases for all three groups. Monthly podcast consumers still overindex for the 12-34 age group and white listeners.

Almost a quarter, 24% or 68 million people, said they had listened to a podcast in the past week. For that group, the average time spent listening to podcasts was 6 hours, 39 minutes, barely topping the high of 6 hours, 37 minutes from 2018. The weekly audience is still logging an average of six podcasts listened to in the past seven days.

For podcasters looking to see more growth in the metrics such as average time spent listening, Webster recommended that the gap between the existing and potential audience would be key. “Increasing the reach of the medium should really be the focus over the next couple years,” he said.