AM/FM radio continued to hold a marked lead for in-car listening in the Infinite Dial 2020. Although it remains the most-used audio source, growth is also happening for other formats behind the wheel. 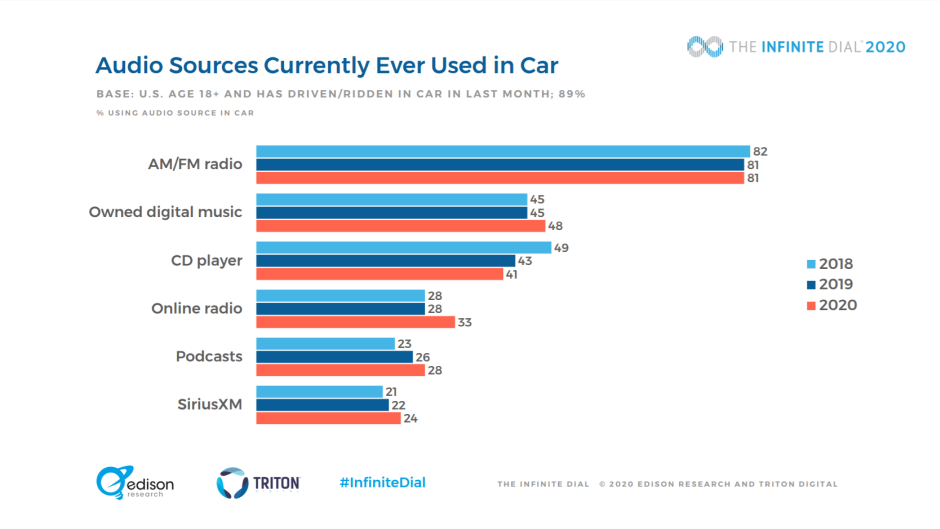 Eighty-one percent of U.S. adults who drove or rode in a car in the past month said they had ever used AM/FM radio. This proportion has been steady for the past few years. Owned digital music inched up with 48% percent, while CD players had another year of decline to 41%. Online radio took 33% and podcasts had 28%.

AM/FM radio is still the most-often used audio source in cars, with a 50% share. In the words of Triton Digital’s John Rosso: “AM/FM radio continues to dominate.” However, that percentage has contracted from 57% in 2017. Owned music saw a spike this year, rising to 20% after three consecutive years at 15%. Podcasts took 4% of the responses for another year.

Ownership of in-dash infotainment systems was 18% among monthly car riders for 2020, down from last year’s 19%. Survey respondents were asked about ownership of the Apple Carplay and Android Auto aftermarket solutions. Nine percent said they had Apple Carplay, continuing a consistent rise since 2017. Android Auto took a dip to 5%. “These two systems together have a really predominant share of this market,” Rosso said of Apple and Google in this space, which the survey dubs ‘vehicle integrated mobile operating systems.’

Listening to music by cellphone in cars reached a new high. Forty-five percent of the total U.S. population age 12 and up said they had ever listened to online audio in a car via cellphone.