The Infinite Dial 2020 broke out trends in hardware ownership. Many types of audio are closely tied to particular devices, so understanding how and where people are listening helps create a clearer picture of the current market.

Smartphone ownership inched upward. Among the U.S. population age 12 and up, an estimated 240 million people or 85% of the total own a smartphone. Growth for this device has been slow for the past few years as the market reaches saturation. “The rapid growth of smartphone ownership is behind us,” said Triton Digital’s John Rosso during the webinar presentation. 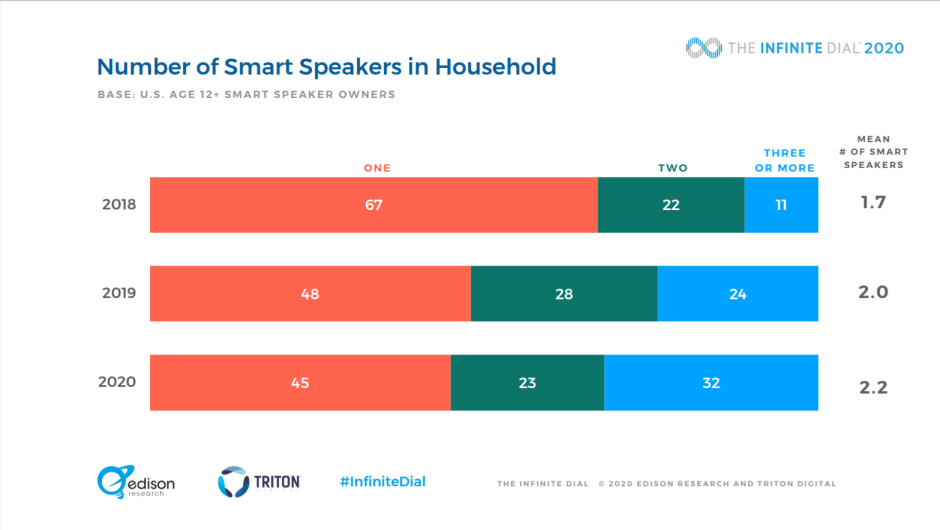 Amazon Alexa is the leading brand for smart speakers in the U.S., with 21% of the population owning one of the tech giant’s devices. Google Home trailed with 11% and the Apple HomePod still hasn’t gained traction past a 1% share. “Amazon’s lead over Google is the result of getting there first,” Rosso said, noting that the brand balance is different in markets where the two rivals made their first releases closer together.

Finally, the Infinite Dial tracked ownership of radio sets. The mean number of radios in U.S. households has been steadily falling. From a mean of 3 radios in a household in 2008, the figure has dropped to 1.5 in 2020. Thirty-two percent of the U.S. population over 12 said they do not own any radios. Lots of research has shown radio to be deeply divide by age brackets, and this survey is no different. Among ages 18-34, more than half (52%) said they do not own a radio, and the mean ownership for that group was 0.9. With ages 35 and up, less than a quarter had zero sets; 65% said they had between one and three, with a mean of 1.8 radios owned.

The survey also examined the overlaps between radio and smart speaker ownership. In 2020, 49% of the total population said they owned a radio but no smart speaker, while 8% said the reverse. Nineteen percent own both and 24% own neither. Rosso observed that “owners of smart speakers tend to look like the rest of the population in terms of radio ownership” even though many people are using their smart speakers to access radio stations or streams.