Without a doubt, it is fascinating watching a new business and ecosystem develop in just a few short years.

Last week in the heat of July, a few thousand people gathered on the downtown Newark, New Jersey campus of NJIT to talk about all things related to Voice. Voice in smart speakers, in cars, on smart phones and in refrigerators.

The trajectory of voice is clear. It is rapidly being integrated into some 60,000 devices ranging from lightbulbs to alarm systems, and while it reduces friction in many ways (“Alexa play Ed Sheeran”), the four year-old industry is hitting new and confounding inflection points. What people value and will do with their devices is less clear at the moment than the limitless and boundless forecasts of many, but the Voice Summit conference was the venue where it was all aired out. The good, the bad, the weird.

It is a nascent business and that generally means there are wonderous experiments and foolish expectations. Amazon has about 90,000 skills and yet the latest Edison Research shows that after having a smart speaker for two years, the average user has chosen to use seven of them, and many of the most popular, from getting the weather, to starting a timer, came in the box.

Here are a few key takeaways:

Don’t Be Clever, Be Memorable

Skills and actions need to be simple and intuitive. Memorable invocations make a huge difference. “Play NPR” makes sense and is easy to recall. Complexity is a turn off. 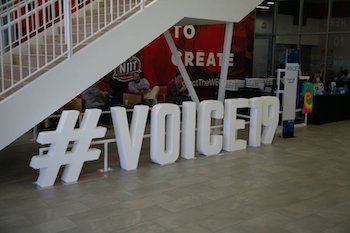 Users are easily frustrated. It is hard to come by real numbers from smart speaker manufacturers, but the abandonment rate, in which people try a skill and don’t return is through the roof, and said to be somewhere around 90%. This means people try Nicolas Cage Trivia and don’t come back, or try a skill that has a frustrating pattern, too many levels of menus or simply didn’t answer the information requested and they don’t return.

The patience for new technology is short.

Smart Speakers Excel At The Mundane

While the business hasn’t yet hit on the magic skill or action that drives huge adoption (think the show “Serial” for podcasting), millions value and use these devices daily. The tasks, according to Edison’s Tom Webster, often lean to the simple, including getting a sports score, starting a music service or figuring when Millard Fillmore was president (1850-1853).

Many big brands were at the conference, figuring out their place in the voice ecosystem. It’s not clear whether many brands see strong use of their skills, and whether that is a result of poor design or weak promotion. According to James Poulter, only 18% of people discover skills from brand advertising. Do people want to interact with brands? Unknown.

We saw several companies whose business is testing skills. Bravo. The New York Times revealed in a session that they have been testing their skills to insure ease of use. Their news quiz has been paused TFN. It is great to see thoughtful science and iteration.

Flash Briefings Are Hard To Find

Although Flash Briefings are the default for news and thus considered prime real estate, many publishers have expressed frustration with the complexity of users finding them and limited metrics making it difficult for publishers to track performance. There are 10,000 of them. See if you can find Flash Briefings in the Alexa app.

2% Have Attempted Commerce On Smart Speakers

There is much effort directed at enabling commerce. Issues range from consumer trust to the difficulty in searching and finding items. Creating an order for an item requires sharing a lot of information. Reordering items feels more natural and easier; “Alexa, reorder my baby diapers.”

Smart Speakers Are Not Good For Discovery

It is frustrating to browse and search for content with voice. See next item.

27% Of Smart Speakers Now Have Screens

The latest Edison Research study makes clear the rapid adoption of smart speakers with screens. That might change the ability to search for items, watch short videos and see a sports score. 66% of those who have a screen say it improves the experience.

25% of NPR’s streams are now thru smart speakers. That is the result of clear marketing. Bravo to Joel Sucherman and the very smart NPR team who are all about audio on every platform.

Pandora Knows A Lot About You

I was on a panel about advertising and smart speakers. The music services such as Pandora and Spotify have tremendous targeting capabilities for both music, podcast recommendations and marketing. They are ahead of the pack when it comes to ads on smart speakers. Of course, running ads is not yet part of the Google or Amazon plan, but hey, who knows?

There Are Great Experiments, Everywhere

It is fantastic seeing the innovation occurring all over. The Sims is on smart speakers. The co-founder of the breakthrough Siri has moved on and is now working on Samsung’s Bixby. Natural conversation is a big initiative.

A big shout-out to Pete Erickson and his wonderfully responsive team at Modev for putting together a remarkable and useful event.