Soundtrack Your Brand, a B2B music provider for physical storefronts, commissioned a study from Nielsen Music into the financial impact of where businesses obtain background music. According to the study, rightsholders could be missing out on a total of $2.65 billion annually due to businesses using the personal streaming accounts of staff members rather than products designed for company and for-profit uses. The figure is based on 21.3 million businesses globally using consumer services rather than accessing music with a business license.

The respondents rely heavily on music in their physical spaces. Eighty-eight percent said they play music daily or 4-5 days per week. It’s also of meaning to most of them, with 42.8% saying music is “very important” and 37.5% saying music is “important” to their business. Although 86% said they are willing to pay some amount to have music in their stores, 83% of respondents said they use a personal music service for their background audio. Just 17% said they use a music service that’s legal for a business setting. 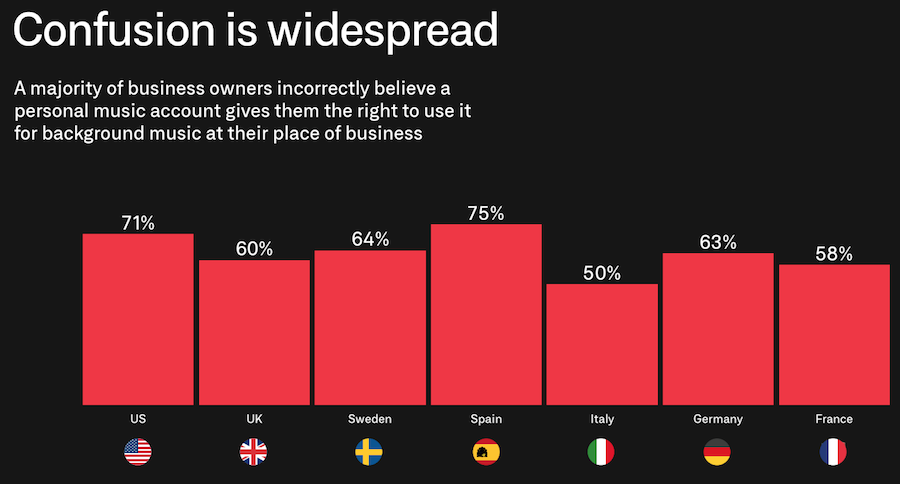 Besides the boggling amount of money potentially lost to rightsholders, one of the other striking takeaways was the degree of misunderstanding about the need for dedicated business licenses among the survey respondents. More than half of the participants from every country in the study thought a personal music account was acceptible to use for their stores’ background soundtrack. Spain had the highest rates of confusion at 75%, followed by the U.S. at 71%.

The study had a global scope, interviewing about 5,000 small business owners across the U.S., UK, Sweden, Spain, Italy, Germany, and France. It focused on businesses with a physical location.