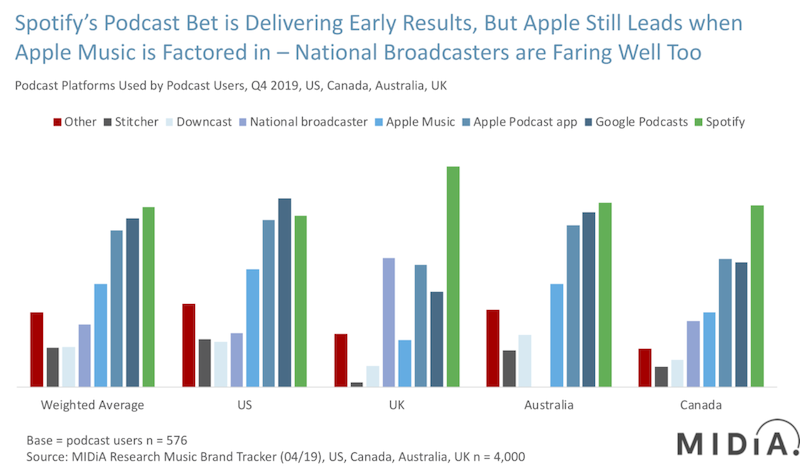 MIDiA Research posted a graphic from its fourth-quarter podcast tracker survey ahead of the launch of its Podcast Platforms report. The data, from a consumer survey of 576 podcast users, show Spotify with a lead in the overall weighted average of four national cohorts. Spotify is also the leading podcast app for Canada, Australia, and the UK, according to MIDiA’s research.

It’s a point of interest that Spotify shows a distribution lead over Apple in all the markets represented here. However, the survey offers separate responses for Apple Podcasts and the Apple Music app, and combining those two platforms gives Apple the lead, MIDiA says.

Of even greater interest, possibly, is that in the U.S., Google Podcasts is shown to deliver more podcasts than Spotify or Apple. (See chart above.)

In the blog post, MIDiA noted that Spotify’s heavy investments in podcasting is both an offensive and defensive move to establish itself. “Spotify knows that its users over index for podcasts – 28% use them weekly, compared to 15% of overall consumers,” the company said. “If it did not go big with podcasts it was always at risk of losing share of ear as podcasts grew, in the same way Amazon lost CD buyers to Apple’s iTunes.”

Finally, MIDiA observed that national broadcasters have been adapting well as listeners shift to streaming. The survey combined BBC Sounds, NPR One, and CBC Listen for its metrics about national broadcasters. MIDiA said that the audience for spoken-word content from broadcasters does skew older, meaning those platforms still have progress to make up in reaching the younger generations.