Much has been written, including this blog, about how in-car listening is likely to change once smart speaker technology enters the auto. What happens when you can simply ask for audio from any source – any podcast, The Beatles on Spotify, an update on the score of the Michigan football game, or a stream of 100,000 radio stations anywhere in the world?

That day is now here. Maybe a little clunky in its first iteration. But here.

I ordered Amazon’s Echo Auto shortly after the announcement in January. It arrived this week (ten months later?) and I took it for a spin.

The device is smaller than anticipated and unobtrusive in design. Remove the speaker from the Echo Dot or the Pringles sized cylinder in your kitchen and it ends up as a credit card sized device about a ½ inch thick.

It reminds me of the early days of car phones with antennas and cables dangling into cigarette lighters.

With great serendipity, I was able to resume the podcast from where I left off on my home Echo device later 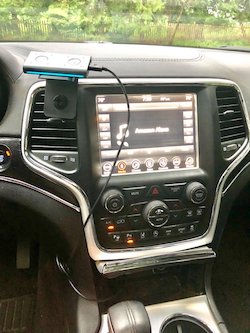 It piggybacks on your phone’s cell service and functions via the Echo smartphone app which itself is a functional Alexa device capable of doing much of what can be done on a smart speaker. It is noticeably slower when WIFI is exchanged for 4G LTE cell service. There is a frustrating lag in response time even when triggering the device with the normal “Alexa” command.

It has a distinct “after market” feel as KUPD, Phoenix Program Director Larry McFeelie accurately related to Fred Jacobs in his blog.

Alexa Auto is promising and yet erratic. The system failed multiple times; “I’m having trouble connecting to the network,” yet I had four full bars on my iPhone each time that occurred over a 40 minute drive.

When I launched it the next day, it failed to connect with the app three times. Remember years ago when Microsoft Windows crashed all of the time? Not a good experience.

I asked Alexa to play several podcasts which it located and played right away. It had particular trouble with The Wall Street Journal’s new podcast entitled “The Journal.” It kept giving me “The Inshore Journal.” They were in search of Rainbow Trout.

Clarity and device comprehension is more complicated in a moving vehicle. That has been an ongoing Siri problem. Echo finally played the right podcast and with great serendipity, I was able to resume the podcast from where I left off on my home Echo device later. This has been a valuable feature of Audible and a welcome addition for podcast listeners.

I requested a few commercial radio stations – there is a decent amount of lag time in which I was unsure it was executing the request. It’s a little like watching the swirling ball on your browser without the weird comfort of the ball swirling.

Everything tech starts with some compromise – think “lug tops.” And that’s how this feels. But it is exciting and empowering to be able to call upon any podcast especially if you did not place it in the queue of your smartphone ahead of your ride. Gotta love instant gratification. 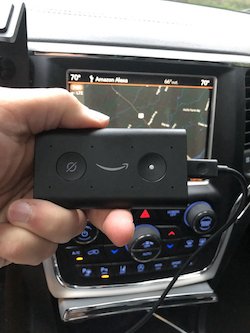 General Motors announced a more native Alexa experience for Chevrolet, Buick, GMC and Cadillac vehicles for early next year, which will retroactively work in vehicles from 2018 with compatible infotainment systems. That will cut the cables, but still rely on the embedded 4G LTE or I assume an individual’s smartphone.

So, there is a glimpse in to the not-to-distant future in which a driver simply needs to ask Alexa a question, play a specific podcast, song, artist, genre, station, audiobook, or learn about Rainbow Trout.

Over time it will be a game changer resulting in more choice, disruption, chaos and the big one: opportunity for those willing to adapt how their content is presented.