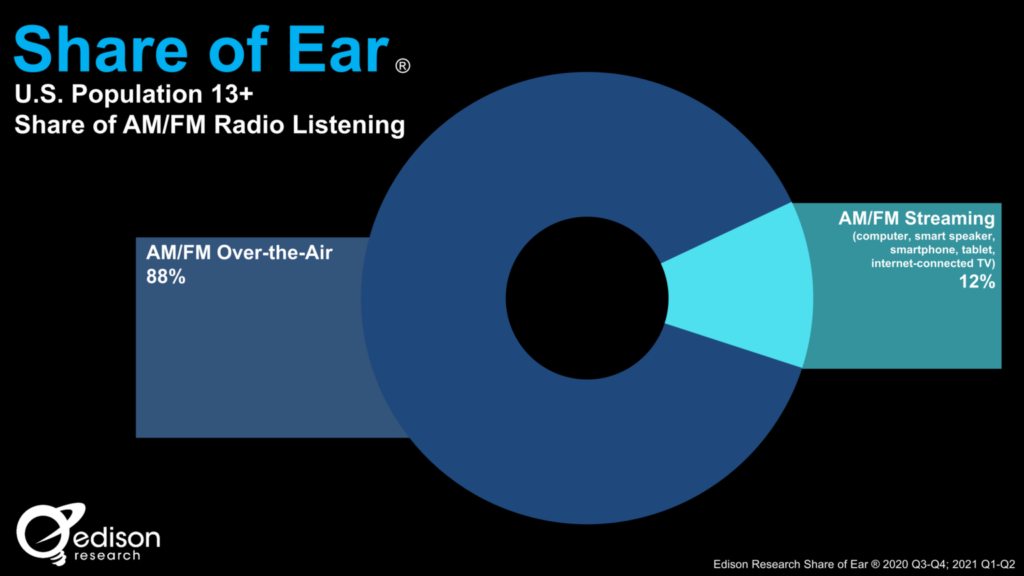 You can’t look at this chart and think things are going well for commercial radio’s digital migration.

If you total up all listening to the content AM/FM radio is sending out, only 12% of the time spent with radio is being consumed on digital devices. Flipping it around, nearly nine-in-ten minutes of radio is consumed on traditional OTA (over-the-air) devices.

This despite streaming having been around for 15 years, and more than five years of smart speakers in homes. These numbers are fresh and reflect a giant pandemic that has kept millions at home for a year and a half while radio companies have been hammering away at their apps, streams and smart speaker presence.

Most commercial radio companies are scrambling to keep up as audio consumption is exploding on devices and platforms. Some have gone as far as changing their name from “radio” to “audio,” recognizing the systemic change and opportunity.  Evolving with new listening options is great news and the right thing to do. So why is AM/FM’s digital footprint still so small?

Today, the average U.S. home has 1.5 radios, (half the number of 2008) and about one-third have no radio at all. Among younger demos, the numbers are more troublesome.

As smart speakers appeared a few years ago, radio executives fanatically touted them as a gift of the digital age relaunching commercial radio at home, effectively bringing “radios” back into bathrooms, family rooms, and kitchens.

How has that panned out?

While smart speakers have provided some at-home lift, it has been nominal. About 25% of commercial radio’s digital listening is on smart speakers. Plenty has been written about radio’s success here, yet it is only one-fourth of the 12% of radio listened to on any digital device.

There is no single reason radio’s digital conversion is slow. It might be bloated commercial loads, more choices including pure-play offerings such as Spotify, owned music, satellite radio, the ingrained habit and simplicity of using radios in the car and at work. It could be much of the content hasn’t kept up with the times or that its local relevance has dissipated.

At most radio stations, the digital content strategy is a stream of their regular programming and a podcast with time-shifted content. Indeed some smart talk radio shows and morning shows have significantly expanded their reach this way. But they remain exceptions.

That begs the question, is radio’s digital conversion slow, or is there another solution to the problem?

History has been unkind to repurposed content on new platforms.

Years ago, local TV news stations learned that running the same feed of the reporter standing in front of yellow tape at a crime scene wasn’t as valuable as publishing picture montages and mini-stories on their station apps. Success came from thinking differently or using a different lens, if you will, focused on how people consume content on small screens.

Freed from the tyranny of “Rob and Denise” behind the anchor desk, local TV has built a significant digital moat. Saturday Night Live and other TV shows feared then embraced YouTube — now, millions of people watch key moments whenever they want, expanding their reach and revenue with lucrative targeted ads.

Maybe ad-supported radio is too linear in its thinking. 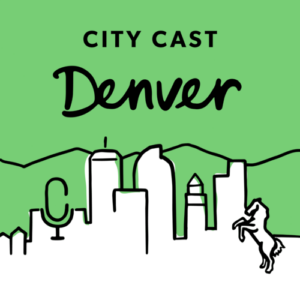 New ventures are swooping in, filling the local void with fresh ideas. At Amplifi Media, we’re seeing signs of digital innovation from companies such as Hubbard with its early-stage Podcast DC initiative, which is an aggregation of local podcasts. Axios has introduced local political newsletters. Graham Holdings, owners of TV stations and the former owners of the Washington Post, is piloting City Cast, a venture creating local podcasts and newsletters. In every market a cottage industry of local podcasts have spun up.

Radio stations can marshal their sales force and powerful megaphone to create, build, and promote unique local digital audio content that retains their base and attracts new audiences. The radio megaphone is the envy of the increasingly crowded podcast space. iHeart Media Chief Executive Officer Conal Byrne was on a recent panel I moderated at Podcast Movement and spoke about radio’s power to drive audience.

We have worked with several radio groups to develop content strategies beyond repurposing the terrestrial signal. Our focus is on how people use voice-activated devices to access short bursts of information and creating podcast content that resonates with local audiences. 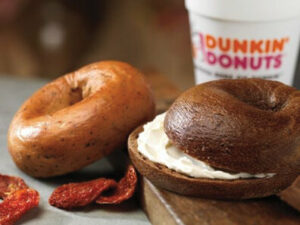 Unlocking local radio’s digital future is not about repurposing the same terrestrial signal – that has been elusive for years. It’s about building new and valuable content that is designed for new platforms and devices.