Today’s post breaks down the numbers of how many podcasts you’re actually up against.

It seems everyone has a podcast. Or do they?

1/4th Of All Podcasts Are Out Of Business, Or More Likely, Were Never Really In It.

Analyzing data from Apple Podcasts reveals how that statistic is misleading. Out of the two million titles reflected in Apple Podcasts (and similar results from Podcast Index), a remarkable 26% have produced just a single episode. One and done. That suggests many people fired up their creative juices, especially during the pandemic, and stopped after creating one episode. Roughly 1/4th of all podcasts are out of business, or more likely, were never really in it.

Sure, there might be some that only planned a single episode but for our x-ray, let’s drop the number of podcasts down by 26% – which means there are roughly 1.5 million (1.48m) podcasts with two or more episodes.

Let’s use three or fewer episodes as a mark. That rockets the number up to an astonishing 44% of all podcasts.

I will channel my best Michael Barbaro here and repeat what was just said for emphasis and clarity. 44% of all podcasts have produced three or fewer episodes.

If a ‘real podcast’ is a series of at least four episodes, that effectively reduces the total of two million podcasts to 1.2 million.

While it may be somewhat arbitrary, see what happens when we look at podcasts with ten or more episodes. The ten-episode level represents slightly more than 1/3rd of all podcasts (36%) and places the number of titles at 720,000. 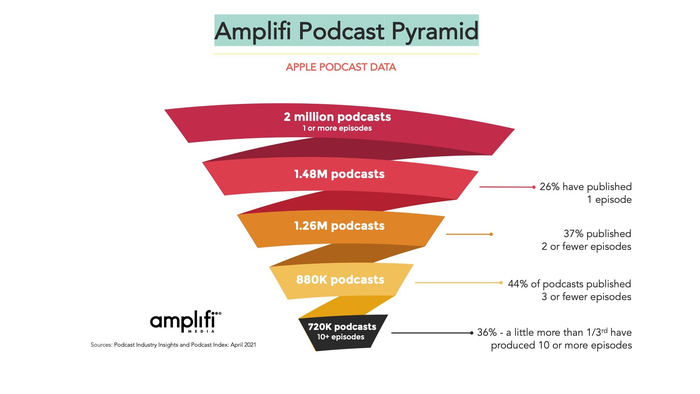 After we published our blog last week in which we suggested that one-and-done podcasts were cluttering up the works, our wise friend James Cridland from Podnews.net jumped in with a hypothesis that many titles come from some of the free-forever podcast hosts, including Spotify’s Anchor. Mr. Cridland is a wizard with a spreadsheet and ran the numbers … indeed, it is true – 63% of single episode podcasts came via Anchor and another 16% from iHeart’s Spreaker.  That’s just shy of 80% of all one-and-done podcasts.

44% Of All Podcasts Have Produced Three Or Fewer Episodes

James also ran numbers from several of the same free sites looking at three or fewer episodes and the percent remains essentially the same. 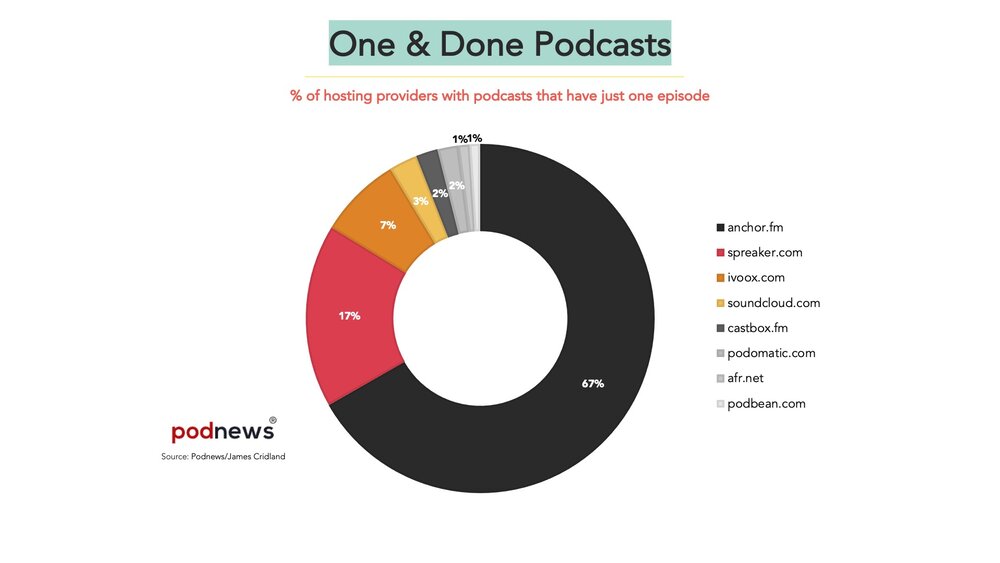 Not all podcasts are meant to be unending series. You can find plenty of great and evergreen content designed to run for just a handful of episodes. That’s part of the beauty of podcasting, but the one-and-done titles unfairly inflate the overall number of podcasts, and it is revealing that 44% have three or fewer episodes.

Knowing this, the two million mark seemingly touted everywhere seems bloated, just as referring to a TV show that produced a pilot but never became a series seems inconsequential in a list of all-time TV shows.

So, what is the baseline of podcasts? What number should we go with? At four or more published episodes, we are suddenly at 1.2 million podcasts. Somehow that seems more realistic and a more useful baseline. Go ahead, debate.  I too could argue that four is low.

But, wait.  There is more.  Mr. Cridland and I will dive a bit further to how many of the podcasts with ten episodes or more have produced in the past year and some other interesting angles.  That, as they say, in our next episode.

Thanks to Daniel J Lewis/Podcast Industry Insights and James Cridland/Podnews.net