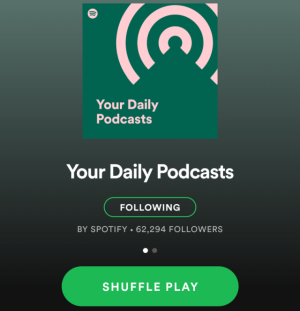 Today Spotify takes another step forward in merging its podcast listening with personalized playlisting, which is the app’s premium competency. The company has launched “Your Daily Podcasts,” a recommendation list based on each user’s podcast listening history. The new product appears today across the board, for anyone who has listened to at least four podcast episodes in the last 90 days.

Six weeks ago Spotify allowed users to build playlists of podcast episodes, or add episodes to music lists for hybrid music/podcast listening. That advance was a striking demonstration of Spotify’s intention to present podcasts in parity with music tracks as listening elements. Today’s launch ropes in Spotify’s algorithmic recommendation chops, along the lines of Your Daily Mix, Discover Weekly, and Release Radar — high-reputation music playlists auto-delivered to users on the app’s Home screen.

How Does It Work?

The question is whether this new algo-list exposes shows and episodes that an engaged user hasn’t seem, and might be delighted to hear. In our test app we follow a few dozen podcast shows, and engage daily with the three buckets in the Podcasts portion of the app — Episodes, Downloads, and Shows.

In our first “Your Daily Podcasts” list, we found 18 hours and 48 minutes of content. The first 10 episodes were from shows we follow — as such that top portion of the playlist mimicked the Episodes list within the main Podcasts area of the app within Your Library. That might discourage some highly engaged users from scrolling down, thinking that Your Daily Podcasts merely replicates Episodes.

But there is a second section of Your Daily Podcasts, also 10 episodes, which is where the algorithmic intelligence kicks in. There, we found a nice correlation to show type and topicality. Spotify has clearly got a handle on basic relationship and affinities within the podcast ecosystem, and is making coherent recommendations (in our case, at least).

Our wish, which perhaps echoes the thinking of other highly engaged users, is that the second half was twice as long as the first half — in other words, that Your Daily Podcdasts was mostly unduplicated from our Episodes list. Spotify’s seems to be targeting unengaged podcast listeners, with a strategy to engage them from another angle. That makes tactical sense. User who are already deep into podcast listening on Spotify don’t need Your Daily Podcasts, but could value it nonetheless and simply skip over the first 10 episodes in the list. We would love an option to receive a 20-episode list of recommended episodes from shows we do not already follow … but that might be getting too deep into the weeds for Spotify product development.

Does this product help the much-discussed, sometimes debated “podcast discovery problem”? As presented and apparently targeted, the answer is a mild Yes … but the real intent appears to be focused on discovering Spotify as a podcast platform. Along the way, users will discover shows.