Spotify is putting its podcasting initiative more in the public eye with the launch of top-100 charts on a public website. No Spotify registration or membership is required to see the lists or listen to samples — you do need one to hear entire episodes or follow shows.

Interestingly, Spotify has developed a Top Episodes chart for the USA. 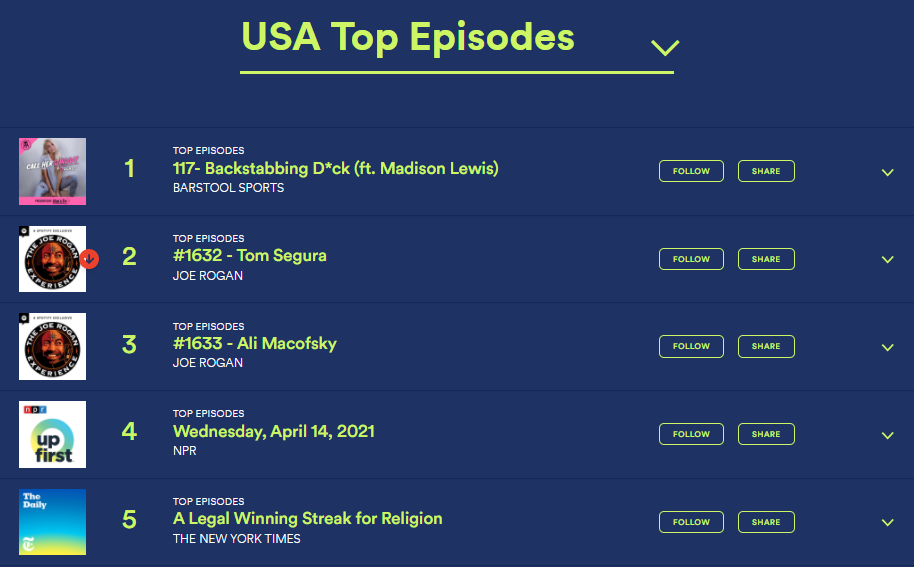 This is an important show discovery chart, as an episode title can draw you into a show whose name might not reveal the scope or details of its topicality. That said, a 100-episode list does not cover much ground in the total landscape of podcasting, and we’d love to see Spotify incorporate a search function for podcast guests and topics. Or, an episode list for each category of show list.

Back to the main lists — there are 17 of them in addition to the broad USA list. The main podcast categories are covered — Arts, Comedy, News, Sports, and so on. Click into any listed show, and you can play a preview. The preview clip features the start of a recent episode, so pre-rolls might be encountered. We listened to the preview of Up First, the NPR morning news  program, and at 11:15am ET we got the entire previous day’s show. (There is no scrub bar or fast-forward feature, so this generous phenomenon cannot be easily tested.)

The company is using the new charts to lean more fully into its public podcast reputation as an important distributor. That’s part of it. the other part of this initiative is targeted to podcasters:

“With more people than ever podcasting all over the world, we want to ensure that podcast charts are growing with you. We also want you to be able to celebrate your success—which is why we’re excited to unveil a revamped podcast-charts experience that’s better in every way: more chances for up-and-coming creators and established creators to make it onto a chart; more ways to view a chart than just heading to the Spotify app; and a higher likelihood of listeners discovering you and your content.”

We see the rationale in which podcasters can benefit from a stand-alone, freely available chart array with generous clips. Spotify claims that podcasters “stand a better chance” to land on a chart than before, but doesn’t explain why that is so. The Episodes chart is certainly one way. And if “more dynamic” means more frequent updates (or perhaps continual updating) that could be another. The overall pitch to podcasters is to sign up in the Spotify for Podcasters program.

We reached out to Dave Zohrob, CEO of Chartable which maintains its own set of podcast charts, including a Spotify list. Zohrob noted that Chartable was updating its methodology to accommodate Spotify’s new chart mechanics. He added some color around how he views Spotify’s potential improvements:

“The challenge is that Spotify has changed which charts are shown (and, by inference, how the charts are calculated) multiple times over the years. Moreover, in the past, they have shown different charts depending on which app a listener was using (e.g. the charts on the native iPhone app were different than native desktop, which used the same charts as the “web” client). One of their stated goals is to unify the charts across experiences, so hopefully with these new versions it’ll be easier for us to represent their charts within Chartable.”