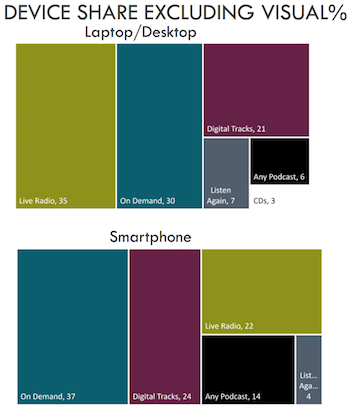 RAJAR has shared the results from its MIDAS Survey for winter 2017. This research measures both reach and time spent by hour, which is called “Share,” as with Edison’s trademarked Share of Ear.

Live radio has a 90% reach. 43% of live radio listening hours are AM/FM sets, and 40% are on DAB radio sets. Half of UK adults, 27 million, have downloaded radio apps.

Live radio also has the largest share of listening hours for each age bracket. But unlike the reach metrics for live radio, which remained between 82% and 93% for all measured age groups, the share results (time spent) eroded in younger groups. The lowest share was 50% for ages 15-24. It secured a 63% share for ages 25-34, a 77% share for ages 35-54, and 88% for those 55 and older. That general trend (less use among younger listeners) is also evident in U.S. commercial radio.