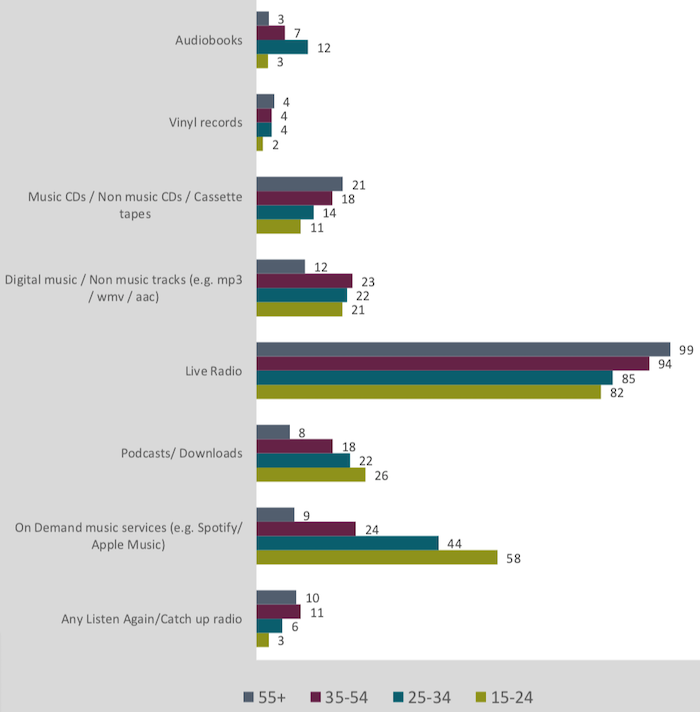 The RAJAR Midas report surveys UK adults on their audio consumption habits. The summer results reveal age as a key predictor in several audio trends, including in podcasts, on-demand music, and smartphones.

Live radio still tops the report in terms of weekly reach at 92%, followed by any TV viewing at 90%. Online video/audio clips was a distant third with 33%, followed by on-demand music services at 27%. Podcasts secured weekly reach of 16%.

The Midas report broke down radio’s reach by device. Tradiitonal analog radio’s had a reach of 59%, closely trailed by DAB digital radios at 56%. Smartphone’s reach for radio was 13%, and voice activated speakers generated 8%.

Smartphones were the top platform for podcasts, securing 68% reach and a 65% share of listening hours. Every week, UK adults consumed 34 million hours of podcasts via headphones.

On-demand music in the UK is still led by smartphones and mobile phones, which posted a reach of 69%. Phones had a 57% share of listening across all adults, but again the youngest listeners showed the biggest result with a 65% share. The rate declined to 38% for ages 55+. Voice-activated speakers turned in bigger figures for on-demand listening with older demographics. The UK average share for on-demand music via smart speaker was 14%. The age 55+ group posted a share of 31%, while the rate was just 9% for ages 15-24. 15 million respondents said they use the premium versions of on-demand music platforms.

Midas tracked the share of different audio types on smart speakers. Live radio took the lion’s share of all smart speaker listening with 70%. On-demand music took a 28% share, while podcasts and audiobooks each held 1% shares.

Smartphones had a very different, and more balanced breakdown. On-demand music had the largest share of audio with 38%. Live radio had 19%, followed by podcasts with 18%. Owned digital tracks were responsible for 13%. 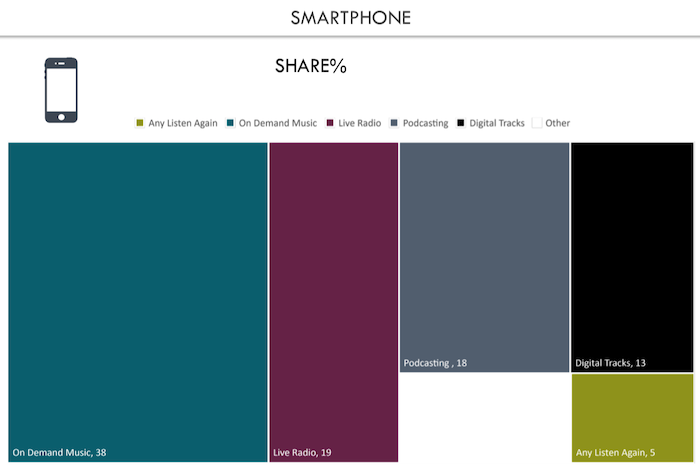