RAJAR has released its latest Midas study about audio consumption in the UK. The surveys were collected during February. Live radio continued to lead with the highest weekly reach among adults aged 15 and up. It had the biggest reach for all age groups, although on-demand streaming is catching up for the youngest listeners. Among ages 15 to 24, live radio’s weekly reach was 78%, and on-demand music had 68%. Live radio also took the largest portion of share percentage with 72%. On-demand had 14% of audio by share, while podcasts and digital tracks tied with 4%. 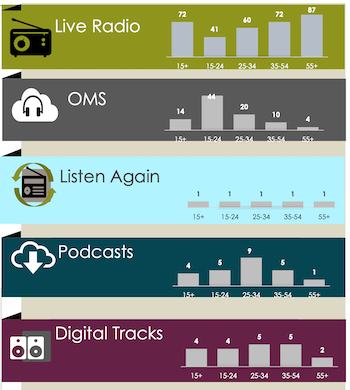 We saw a similar broad patter of generational shift in the winter Midas study. The split in preferences for older and younger listeners continued in the spring results. In examining audio by share data by age (as opposed to the reach metrics described above), the younger groups were more likely to favor on-demand audio and have lower rates for live radio, while the trends were reversed among older demographics. With ages 15-24, the live radio share of audio was 41% and on-demand audio was 44%. For ages 55 and up, live radio had an 87% share and on-demand audio had just 4%. Podcasts were most popular among the 25-34 age bracket with a 9% share. Both the 15-24 and 35-54 groups posted 5%, while the share was only 1% for 55+.