The quarterly RAJAR Midas survey offers a snapshot of the UK’s Internet-delivered audio consumption. The autumn 2019 results showed that listeners’ age continues to drive many of their audio habits, and the findings emphasized the importance of audio on the go.

Live radio reported 93% reach. This audio source had the largest rates for every age group, although it was lowest (83%) for the 15-24 bracket and highest (98%) for ages 55 and up. On-demand music had the second-largest overall reach at 28%. The age breakdown was the reverse of live radio, with even bigger gaps between the age demographics. Ages 15-24 had a whopping 60% reach, compared with a meager 9% for ages 55 and up. Podcasts had 17% reach overall, but that average was brought down by the 9% reach for the 55+ group; all other brackets had a reach of about 20%. 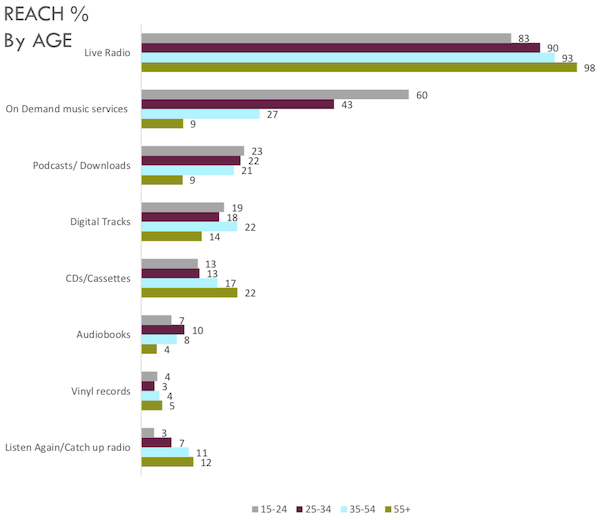 Live radio clocked in with 73% in audio (excluding visual) by share, remaining a dominant force in the UK’s audio landscape. On-demand music took an 11% share, while podcasts and digital tracks both secured 4% shares. The live radio shares rose along with respondents’ ages. The 55+ group reported an 88% share, while ages 15-24 had just 45%. The youngest demographic had the largest shares for both on-demand music and digital tracks, which declined consistently for each age bracket up.

Radio is still closely associated with transit. In examining live radio by activity, the survey found a 59% reach for driving/traveling. Almost a quarter (22%) of live radio hours are heard while driving or traveling.

DAB sets edged out traditional AM/FM radios in live radio reach by device, at 54% and 52%, respectively. Smartphones took a 13% reach and voice-activated speakers had 7%.

Podcasts are reaching listeners during a range of activities. Driving/traveling had the largest reach by activity with 37%, while 33% tune in while relaxing or doing nothing. Working/studying, household chores, and eating/drinking/cooking each had reach of at least 20%.

Smartphones have the largest reach by device for podcasts at 68%. These mobile devices were responsible for 63% of podcast listening hours. Laptops took a 21% reach by device, while smart speakers had just 1%.

Smartphones were also the key device for on-demand music. Overall, smartphones had a 61% share by device. The device trends echoed the overall listening share trends, with ages 15-24 posting the largest share for on-demand on smartphones at 68% and that rate declining to 49% for both ages 35-54 and ages 55+. On-demand music’s largest reach by activity was also decisively driving/traveling at 40%. The survey found that 17 million UK adults use a premium on-demand music service. 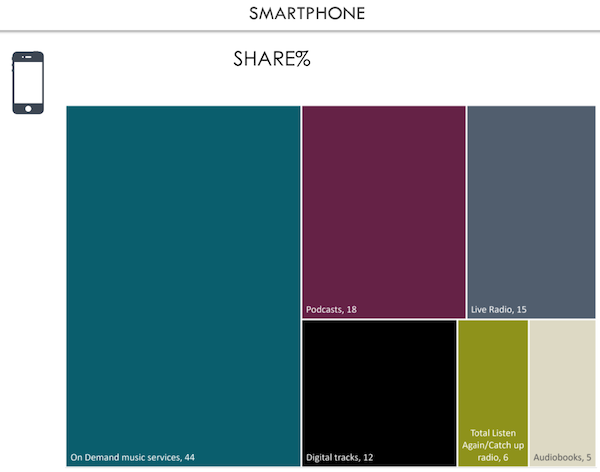 The survey explored audio share by hardware. Voice-activated speakers are dominated by live radio, which is responsible for 75% of their use. On-demand music took a 23% share, while podcasts and audiobooks each took 1%.

Smartphones had a more even distribution. On-demand music had the biggest share of audio on smartphones with 44%. Podcasts secured 18%, followed by live radio at 15%.