Podcasting is increasingly a cross-media phenomenon, with examples of hit audio shows crossing over to visual media developments in movies and streaming TV. That trend has been in motion at least since 2018, when Gimlet Media’s brand-leading show Startup was turned into a streaming TV show.

The relationship of podcasting and radio is natural, and has been exploited on the public radio side with several popular NPR shows landing on podcast popularity rankers. The reverse equation, moving podcasts into radio, is sometimes hindered by radio’s rigid hourly clock, to which podcasts cannot always adapt.

In the Westwood One blog, Chief Insights Officer Pierre Bouvard lays out some metrics supporting the idea that “Podcasts Launched the Radio Star.” It’s about Ben Shapiro and Dan Bongino, star political talkers who leveraged podcast success to syndicated radio. Bongino is being syndicated into Russ Limbaugh’s time spot in many stations, and Shapiro (whose show was a key piece in launching the Westwood One Podcast Network) is also syndicated to 256 stations for three hours a day, expanding the one-hour podcast.

Key to this study is an awareness fact via podcasting. Through a survey conducted by Mary-Blue, Westwood One has determined that 64% of frequent talk-radio listeners are familiar with Bongino from the podcast. As to Shapiro, Pierre Bouvard says this: “Westwood One’s Ben Shapiro, a relative newcomer to AM/FM radio, exhibits favorability ratings virtually identical to long-time talk radio talent.”

the audiences in these crossover stories appear to be additive: Over 80% of listeners listen to one product or the other (radio or podcast), with fewer than 20% listening to both. 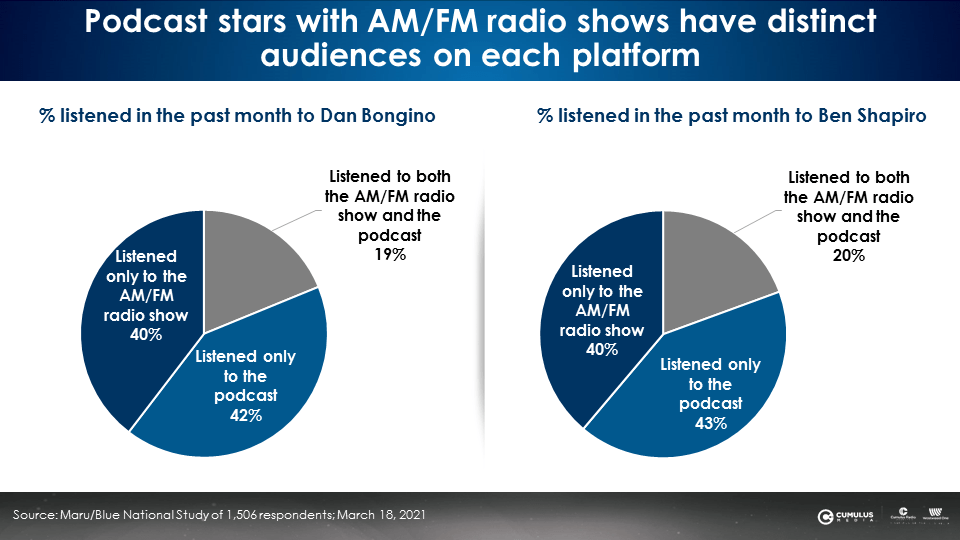