In an unexpected and comprehensive feature update, Pandora announced that it is rolling out Voice Mode to all of its users. The feature is a personalized voice assistant designed for Pandora and customized to the platform’s listeners. The assistant is activated with the phrase “Hey Pandora” and will respond to conversational requests for controlling audio playback. Users can request a type of music by genre or activity, add tracks to their playlists, access podcasts, and adjust volume.

The Voice Mode is initially activated with the microphone icon in the search bar of the Pandora app. For future uses, it can simply be reached with the activation command. Some quick testing revealed promising (but uneven) results. 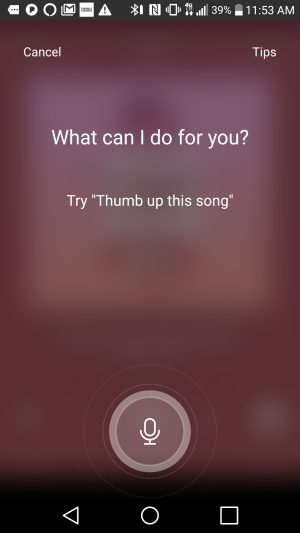 Two simple commands — “thumbs up” and “skip” — worked perfectly. We could also start a saved Pandora station. A more complex request to create a new Pandora station based on the current song was more difficult to fulfill. More than once, the app interpreted “Start a station on this song” as “Start uuuu station on this song,” and declined to take any action. (Pandora spells out the text of your command, as heard by the app.) Simplifying to “Start a station” spelled out correctly, but we didn’t receive a confirmation of success.

Glitches notwithstanding, the importance of this feature is clear. Voice control is not entirely about smart speakers — marketplace share of voice commands is really focused on the operating system. Hence, Google Assistant is built for Android phone as much as for Google Home speakers. Amazon has not explicitly put Alexa into the Amazon shopping app … but perhaps it should.

Pandora’s voice control resembles the disintermediation of Shazam and SoundHound by various song-ID features found in Napster/Rhapsody and other services — not to mention Android’s song-ID which connects with Google’s music services. In Pandora’s case, the app-specific voice commands wrap the user into the app, no need for external voice control by Google or Amazon.

Well, almost. We discovered that the commands work only when the phone is awake and Pandora is the activated app (in an Android 7.0 phone). This disappoints the ideal scenario of walking down the street listening to Pandora with mic-enabled headphones, issuing skips and music selection commands without ever touching the phone. One premise of a voice-controlled world is that you never have to touch the voice-controlled device.

Pandora explained the necessity of this, since Pandora is not an Android or iOS native app, but a 3rd-party app. Not a bug, then — just an ecosystem reality. We still think Pandora voice controls are cool and handy — we expect to use them mainly when listening via the phone app at the desk, more than when walking around.

Voice Mode is rolling out today for all Pandora users.