In a blast of information preceding its appearance Friday at the IAB Podcast Upfront 2020, Podtrac/Authentic sent us a ream of data and new show deals. (Podtrac and Authentic are sister companies; Podtrac measures podcast consumption and Authentic is a top podcast advertising sales house.)

CEO Mark McCrery is scheduled to speak at IAB on Friday, at 1:40pm ET, and graciously sent us some advance information.

The Rebound, and Apple

On the data side, four points:

That final point, representing Apple’s lead in podcast distribution, is represented in this chart: 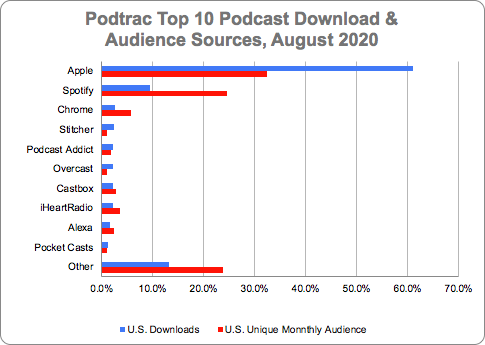 Note that Apple has extended its dominance when measured by downloads, and Spotify is catching up when measuring audience numbers. It is a startling recognition of spotify’s audience clout that the audio platform deliver about 25% of podcast listening, in the relatively short time it has  been involved in the industry compared to Apple.

On Authentic’s side of the company, three new podcasts have come under an exclusive representation agreement:

Michael started his career as a journalist, then became a best selling novelist, then executive producer of Bosch.  Connelly is back with Season 2 of Murder Book podcast “The Women Who Stopped Sam Little.” The new season investigates Sam Little, the most prolific serial killer in American history.

Skip Hollandsworth, staff writer at Texas Monthly for 35 years, award-winning true-crime writer and the best-selling author of The Midnight Assassin introduces a new true-crime podcast, Tom Brown’s Body.  A popular high school senior in a small Texas town disappears. No one is off the hook and everyone’s a suspect.

Hosted by Joel Leon (A Book of Things I will Tell My Daughter, God Wears Durags Too) and Katy Stoll (More News, Even More News), Unpacking America features black thinkers, activists and experts.  It combines historical discussions about race and opportunity with the present day.