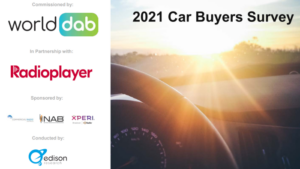 No public presentation is currently scheduled as of this post. But the slides are freely available HERE. Edison fielded its survey work in six countries, talking to over 1,000 people in Australia, France, Germany, Italy, UK, and the U.S. All respondents were 18 years or older, and they were all interviewed in September. Importantly, all participants have either bought a car (2018 model or newer) in the past two years, or plan to buy one in the next 12 months.

The research thrust is about in-car listening, and the press release contains this headline: “90% of car buyers expect broadcast radio to be standard in-car equipment.”

As we thumb through the slides, we note some comparative metrics that position American consumers as more detached from in-car listening to AM/FM than in other countries. Four questions, in particular, reveal interesting attitudes in the American group:

“How often do you typically listen to radio?”

Here, Americans are represented as listening less on an everyday basis than all the other countries except Australia:

When asked about a radio (AM/FM/DAB/DAB+), American respondents were the least desirous at 59%. All other national groups were between 64% and 70%. That said, the U.S. brought up the rear in all the survey suggestions — there were nine audio sources suggested in that question.

“Do you typically listen to audio in a car/vehicle through your mobile device?”

This interesting question could be an indicator of an audience’s detachment from broadcast radio. In the U.S. group 50% said “Yes,” while no other national group was over 43%. 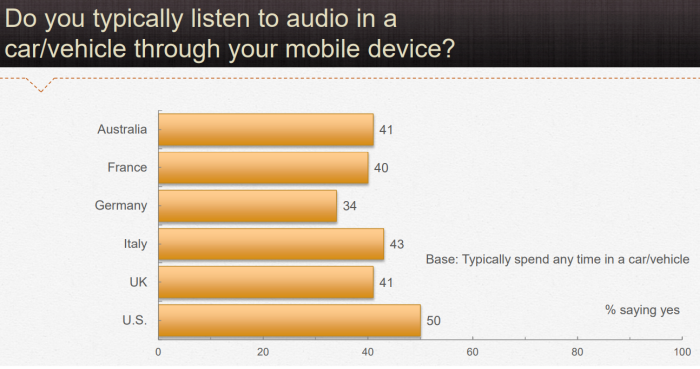 “Which do you typically listen to most often in a car/vehicle”?

This was the Q&A potentially most troubling to American radio, as the U.S. group skidded well below the others in answering “Traditional AM/FM/DAB/DAB+ radio” — only 45% compared to the range of 61% – 71% in the other groups.

To be sure, other questions and responses put American car buyers in the hunt for an in-car radio experience. Notably, the car is where Americans listen to the radio most often (53%). An even stronger endorsement comes from this statement: “You would not listen to your favorite radio stations if you could only listen online,” which was affirmed by 65% of the American group.

In all, the survey presents an interesting picture of consumer reliance on traditional radio tech — in the car and elsewhere — which is certainly what the sponsors wish to highlight. All national groups give extremely high amounts of agreement with statements like “Radio helps you stay up to date with what’s going on the world,” and this one: “Radio keeps you company in the car/vehicle,” which received 90%-plus agreement across the board.