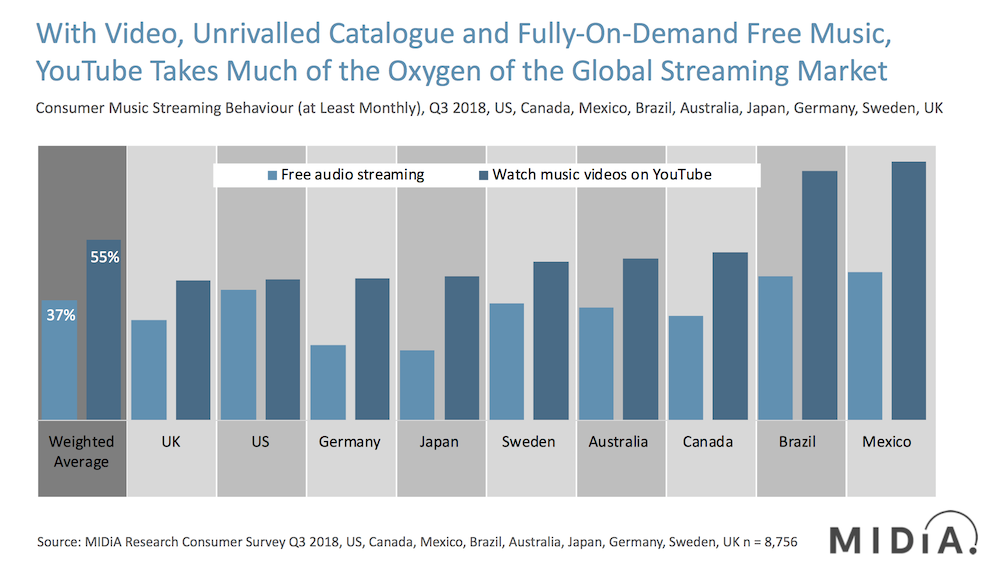 MIDiA Research has a new report examining YouTube’s impact on the international streaming market. Its assessment shares statistics from the video platform in Q3 2018 and shares insights as to how the recent legislation passed in Europe could have unintended effects on the music industry as a whole.

According to MIDiA’s numbers, 55% of consumers regularly use YouTube to watch music videos. That gives the platform a bigger dedicated audience than the 37% reported for all free audio streaming services. It also has international appeal, ranking as the top audio platform in all markets surveyed. The gap between YouTube and other free audio was narrowest in the United States, while YouTube was about double the penetration of free streaming in Mexico.

MIDiA argues that YouTube’s use of safe harbor laws have been a key factor in allowing it to secure this broad global audience. “If you are a consumer in the market for a free streaming service, you have the choice between everything that you want, with complete control or constraints and restrictions, with fewer features,” the blog post explains. But it also highlights that YouTube has been more successful than streaming services at generating money from advertisements on its free platform: “Subscription paywalls lock away your best users, out of the reach of ads, which in turn reduces the value of your inventory to advertisers, which leads to declining revenues. YouTube is not about to swap a large-scale high-margin business for a small-scale low-margin one.”

Article 13 of copyright legislation passed in European Parliament in September aims to address how YouTube has benefited from safe harbor protections. The change would make digital platforms responsible for ensuring that user-generated content does not infringe on copyrights and on managing the compensation for rightsholders. The controversial move received support from much of the music industry, but was criticized by heavy hitters such as Google, Amazon, and the inventor of the World Wide Web. MIDiA approves of the push to level the playing field and limit YouTube’s current advantages, but recommends changes focused on improving the ecosystem for all streaming players rather than just hamstringing YouTube.