Integr8 Research has released a series of blog posts highlighting research into the habits of Spotify listeners, and how they relate to trends seen in broadcast radio. The company analyzed the top 200 tracks on the Spotify charts in the U.S. each week from the beginning of 2019 through August 1.

In the first blog post, Integr8 observed fluctuations in consumption trends. The company found that streams of the top 200 tracks changed by up to 34% from week to week, with as many as 716 million streams in a week and as low as 536 million. The high points happened when popular artists released new projects. New music from Ariana Grande, Billie Eilish, and Lil Nas X was released in each of the three weeks with the most streams. Integr8 suggested that radio programmers should note listeners’ interest in hearing brand new music, especially from big performers. 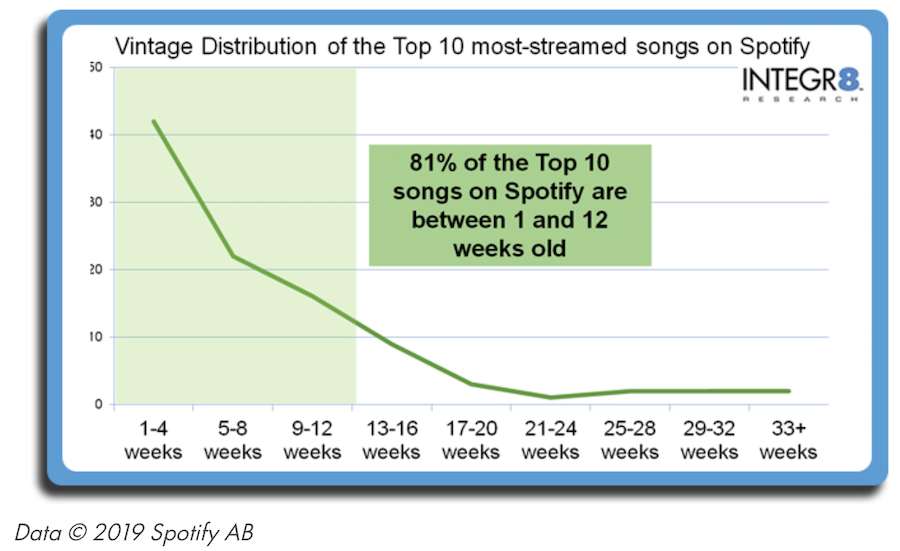 The second blog post compared the top-performing Spotify songs with the 50 biggest songs on radio. The top 10 radio tracks are usually between 9 and 20 weeks old, while the top 10 Spotify tracks are between 1 and 12 weeks old. Integr8 suggested that Spotify’s trends are following those seen in the sales for different physical formats during their heyday. The chart for Spotify hits was similar to digital downloads in 2014 and for sales of 45s in the vinyl era. That suggests that Spotify is filling the role previously held by record stores.

In looking to Spotify for programming insights, Integr8 suggested that radio should look at a track’s week-over-week performance to determine its staying power. The third blog post in the series observed three likely trends for the big streaming hits.

The final blog post compared how long a song remains popular on Spotify compared with how long it gets heavy rotation on radio. The difference in amount of time it takes for a track to break the top echelon on Spotify and on radio may mean that radio doesn’t pick up a song until after it is already on a steep decline in the streaming charts.