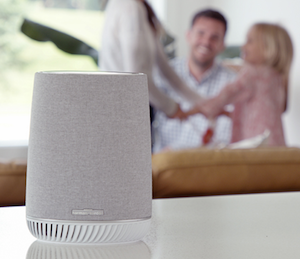 At IFA 2018, a major tech showcase in Europe, smart speakers are decisively moving into the foreground of home electronics. The event yielded several announcements of new products from manufacturers large and small, cheap and decidedly not cheap. Although many electronics brands are getting into the smart speaker game, a few of the new products went a step further and took the Swiss army knife approach, combining smart speaker functions with other home tech.

Routers stood out as a notable overlap, with both Huawei and Netgear unveiling hybrid devices. The Huawei AI Cube is, despite the name, a cylindrical speaker supporting Amazon Alexa with high-quality audio and a 4G and WiFi router. The Netgear offering is the Orbi Voice, which also has Alexa support but offers directional, front-facing speakers rather than 360-degree sound.

The crossover is unusual, but not without merit, as The Verge points out: “Mesh routers are meant to be placed around the house to boost a Wi-Fi signal in dead zones. And the more out in the open the router is, the better the signal is likely to be — so building a router into a product people actually need to place out in the open is a good idea.”

As companies that aren’t just audio specialists explore the potential of smart home and voice AI, it seems likely that more and more crossovers could be in the works.