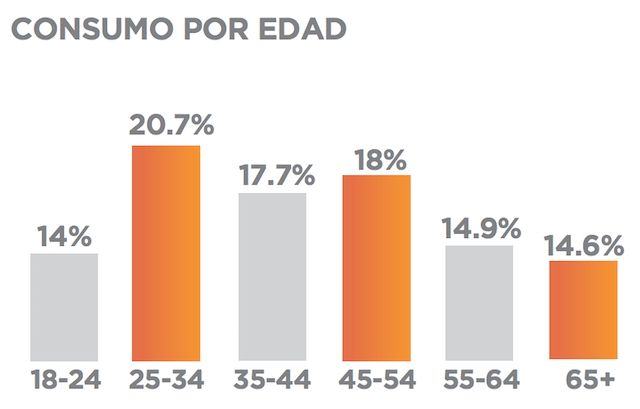 Audio.ad, a specialist in digital audio advertising for Latin American and Hispanic audiences, has released a report on the current market in Chile. It is the second report on this country’s attitudes toward digital audio; the first was in 2015. More than 1,000 cases were included in the online survey.

Digital audio, including Internet radio and streaming platforms, is consumed by 70% of the survey respondents. Internet radio proved a notable source, with 85% of Chilean listeners tuning in for between 1 and 12 hours per week. Most (81%) did so on smartphones, while 16.7% accessed Internet radio on desktop computers and 7% listened on tablets. The largest age bracket was the 25-34 group with 20.7%, although the 45-54 group was second-largest with 18%.

More than half of the respondents (62%) said digital audio is an important or very important part of their day. Music is the most common type of digital audio with 85% of respondents, compared with 28.6% for news and 17.3% for sports. YouTube was the most popular online streaming site, reaching 52.1% of Chilean respondents. Spotify had 43.5% of responses and Google Play Music had 15.4%.

The report also inquired about participants’ thoughts on advertising in digital audio. Two-thirds (65%) said they have purchased between two and ten products promoted by digital audio ads in the past year. However, many didn’t think digital audio ads were overwhelming. Forty-two percent deemed audio ad levels scarce to moderate.

“This survey is a contribution to the advertising industry, mainly because it shows the current audio consumption habits of users,” said Pablo Pizarro, Audio.ad’s country manager for Chile. “Today in Chile, we see a very strong focus on Radio (Information/News) and Music in general, driven not only by young people who are heavy users, but consumption is more transversal and covers many different age segments.”