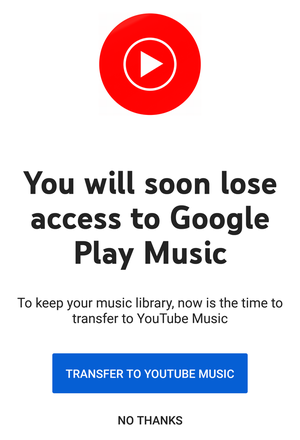 The warning is clear, though without a timeline: “You will soon lose access to Google Play Music.” That’s what Android users see when they open the Google Play Music app — Google’s would-be direct competitor to Spotify, Apple Music, and Amazon Music.

Users are advised to transfer their accounts to YouTube Music, where the subscriptions will continue. YouTube Music is a starkly different UEX environment and library proposition. We like both services. We anticipate some degree of unhappiness with the change.

Google Play Music was seeded as “Music Beta by Google” in 2011 as a challenge to Apple’s iTunes Music Store. “Google Play” soon debuted as a brand ID, covering music, movies, and books for sale. In those early days users could also upload their local music collections for listening. The music-specific part of Google Play was the “Google Play Music” brand … arguably a terrible name.

It got worse when streaming was added in 2013, and the service title was embarassingly changed to the lumbering “Google Play Music All Access.” From there, Google expanded the service into a global range of countries. (See all our coverage HERE.)

Meanwhile, Google-owned YouTube was steadily becoming one of the most important, influential, and trafficked music distribution platforms in the world. While the user propositions of the two music offerings were well differentiated from each other, the subscription inter-relationship between the two suffered some tangles. It seemed over the years that Google could not decide how to optimally funnel users. To our sensibility, Google Play Music seemed like neatly trimmed suburbia compared to the wild crowdsourced growth, metadata confusion, and deep unpredictability of YouTube’s music content.

As a prospective solution, Google splintered off a YouTube Music service with a dedicated app in June, 2018 (see our original review HERE). After several design iterations, the mobile and web apps have settled into competitive designs, in our view, but far fewer curation and organization features than Spotify.

One question now is whether Google Play Music subscribers will make the leap to such a dramatically different (especially in look and feel) app experience. As with any product discontinuation, that question is playing out poorly with a stringent cohort of affected users. A sample of Twitter reactions:

“I won’t use your services for music anymore, #Google. @YouTubeMusic is terrible.”

“This is an abomination. If you were so proud of this, how come it happened under the radar? I got no emails about this, no pop ups on the app until today…” (@TeamYouTube replied in part: “Sorry about this – you can still listen to your purchased songs by transferring your library.”)

“Thanks to all the amazing @googledevswho made @GooglePlayMusic a fantastic music streaming service – I’m sorry it had to end this way. I’m moving back onto @Spotify after five years because it’s a much better experience than the sad replacement service @youtubemusic is.”

“It was the best music app on Android guess I’m switching to Itunes.”