Digital gaming and digital audio are becoming entwined, as recent RAIN Summits have explored. The field is ripe for audio advertising which can uniquely occur within a game without interrupting the game.

That is the rationale for a new development of in-game audio ads by Audiomob. The ad tech company has launched audio ads for mobile games, and a demand-side platform (DSP) for setting up campaigns. Some launch details and a demo video are HERE.

Audiomob seems to be taking the pole position in a race to capture rising usage and revenue figures in gaming. 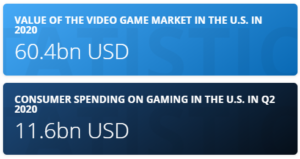 The whole videogame market in the U.S. is  valued at roughly $60-billion. Consumer spending in videogames in Q2 of last year was $11-billion, implying an annual consumer spend of about $44-billion, according to Statista. (The entire videogame industry includes in-home hardware and compatible games, whereas the Audiomob audio ad system and DSP are for mobile games only.)

Pandora is casting glances at gaming as well. The streaming giant has launched Game Time, a new series of exclusive playlists featuring artists who also happen to be avid gamers. Each playlist features a hand-picked lineup of songs that soundtrack each artist’s gaming experience. Twenty lists are in the collection to start.