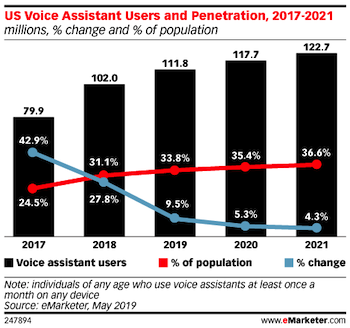 As voice technology becomes more mainstream, the rate of change in the number of people regularly using those tools is expected to slow. This year, eMarketer is estimating that the percentage change in monthly voice assistant users will by 9.5%. By 2021, the rate is expected to dip to 4.3%.

eMarketer found that smartphones were the most common hardware choice for voice assistants. It anticipated that 97.9 million people would use voice on their smartphones at least once a month this year, with the audience projected to reach 107.9 million in 2021.