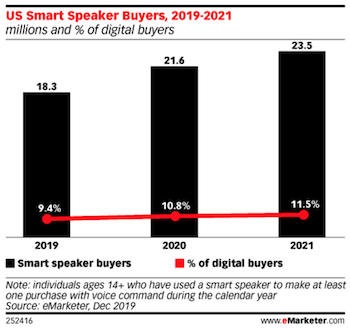 eMarketer has been tracking the adoption of smart speakers, and while the device segment is growing in popularity, its use as tool for ecommerce has not risen as rapidly. The company’s latest projection is that by the end of 2020, 21.6 million people in the U.S. will have used a smart speaker to make a purchase.

The new estimate is a mixed result. It’s lower than eMarketer’s forecast made in Q2 2019, which pegged 23.6 million as the likely audience. But even at the slower pace, 2020 will likely still hit a milestone where more than 10% of all digital buyers in the U.S. will have done so on a smart speaker.

eMarketer cited lack of trust in the new technology and less confidence in shopping without a screen as reasons why the uptake for ecommerce via smart speakers has been slower.

“There’s a good deal of friction in the voice-based buying process because people can’t see what they’ll actually be purchasing unless they have a screen on their smart speaker,” eMarketer principal analyst Victoria Petrock said. “So, most of the purchases made today are reorders and things that don’t need to be inspected.”