This week Spotify announced the purchase of Bill Simmons’ The Ringer. They also held a Q4 conference call which pretty much lays out a roadmap for Spotify’s podcasting initiative and more broadly, the potential impact on the entire podcast ecosystem. Lets run through it using comments from CEO Daniel Ek on the earnings call.

EK: We’re very pleased with the overall growth of podcasting, with 200% year-over-year growth in engagement. And that’s a global phenomenon.

The growth certainly matches their effort onboarding thousands upon thousands of podcast titles along with the purchase just about one year ago of Gimlet, Parcast and Anchor. And now The Ringer, with its rich content portfolio including its popular web content.

EK: “With the Ringer, we’re basically getting the new ESPN”

Bill Simmons must love that line considering the acrimonious departure from ESPN a few years back. This gives Spotify an instant-on in the significant sports category.

2. Podcast monetization is very much on the radar

EK: “I think it’s fair to say that we’re just very early in the monetization of podcasts overall. And as it relates to third-party content i.e. content that we’ve just licensed and put on the service right now all monetization is their own and we’re not participating in that. As you look at the ad opportunity going into 2020, part of that is us experimenting with ad tools.

And quite a few of them have the potential of obviously of being very powerful for third-party podcasters as well. So, long-term we feel very, very excited about the opportunity.

And we think we can bring a whole another game of monetization for podcasters and that that will lead to just the overall growth of the podcasting industry.”

It’s pretty clear that podcasters are enjoying a “free-ride” as Spotify grows its listening audience and advertiser reach for podcasts.

What will the model look like for third-party podcasters? What is a fair revenue share? Will spot replacement be mandatory or can publishers continue to use Spotify as a pass-through with baked-in spots? Okay, that’s not on this call. But the direction is clearly telegraphed.

3. Spotify is clearly focused on target-ability and scale.

EK: “It is pretty clear that we haven’t added Internet-level monetization yet to audio……. in terms of just targeting, a lot of that is lacking in podcast today. And you’ve seen it time and time again. As you add those capabilities, you generally can raise CPMs across the board, because advertisers feel more certain about the results that they’re getting. And if we do that, that’s going to be a tremendous benefit for all the podcasting creators, but it’s also going to be a tremendous benefit for Spotify.”

This paragraph is brought to you as a public service on behalf of every publisher who developed an unhealthy drug-like dependence sharing their content on Facebook and later shocked when rules changed, algorithms were altered and monetization was thwarted. Not saying that would happen here, but when you are using someone elses’ well cultivated pipe, you are not in control.

Having said that, Spotify may be the absolute best solution for the long tail of podcasters who cannot afford a sales staff or garner enough traffic to be with an aggregator. That has certainly been the case on the music side.

4. Spotify knows a lot about its listeners – a big market advantage

EK: “So we’re developing a lot of those tools. Some of them you’ve heard us talking about, like the SAI inserts, which is streaming audio inserts. And we’re still early days in terms of the development of those and trialing of those. But for us, when we look at the overall opportunity, it is pretty clear that we haven’t added Internet-level monetization yet to audio.” 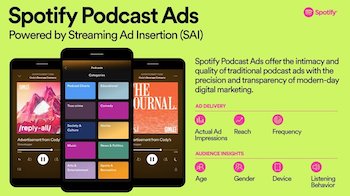 Spotify already automates ad insertion on the music side, taking into account location, device, age and other known factors such as listening history, which means different listeners are likely to receive different ads. Metrics such as frequency of how often an ad is heard and its reach will be coveted by brands. All of this dynamic insertion will migrate over time to podcasts. Advertisers will relish the ability to have confidence in ad measurement.

EK: “So in general, we expect advertising to be stronger in 2020, and we expect it to ramp throughout the year. So the progression should get better, particularly as the podcast inventory grows.”

Measurement in podcasting remains a pain point. A download does not equate to a listen and that leaves producers and advertisers guessing about how many heard an ad. Spotify has a distinct advantage over other sources as most podcast listening on their platform is streamed rather than downloaded, which in turn, enhances the collection of user data. All of this is readily available to any producer who places their podcast on the platform. That’s also a win for producers looking to track listening patterns – I’m talking to you who ramble for 5 minutes before getting into the content.

“Only 16% Of Its Overall Users Are Listening To Podcasts”

By all accounts, Spotify’s podcast listening is growing rapidly. While it is not the top source for podcasts in the U.S. as some overzealous researchers (being kind here) have claimed, it is indeed firmly locked in to the number two slot behind Apple Podcasts. Libsyn, for example has them at 13% of all podcast listening and Chartable is right in the same zone.

Spot replacement and revenue sharing is likely to generate some tension with podcasters currently monetizing their shows but as I mentioned, for those with a smaller footprint, this could be a lifesaving monetization path and the difference between podcasting and hanging up the headphones.

Well, these were certainly not featured on the Spotify conference call, but ……..

Spotify is rapidly building an ecosystem unrivaled in the podcast space. It will most certainly revolutionize and transform the business.

And, importantly, it appears to be unfolding now.