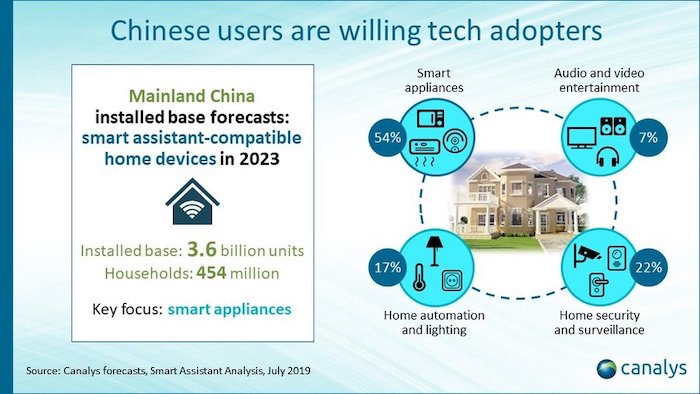 New research further solidifies the importance of China as a future top market for applications of voice technologies. Canalys released a prediction that China will be the world’s largest smart assistant install base by 2023, numbering an estimated 5.8 billion devices with the technology built-in or compatible. If it reaches that figure, China would have twice the projected install base of the United States.

Canalys anticipated that the install base for devices with built-in smart assistants will reach 2.2 billion by 2023. Smartphones are expected to remain the majority of that figure with 59%.

“The growing Chinese middle class is relentlessly pursuing a higher standard of living, and smart appliances will play a major part in their vision of the ideal home,” Canalys Research Analyst Cynthia Chen said. “Appliance makers Haier, TCL and Hisense are changing their strategies to capture the trend early. Even the retailer Suning and smartphone vendor Xiaomi are aiming to disrupt the market.”