The Canadian Podcast Listener Report 2018 offers insights on the steadily growing audience for podcasts in Canada and the unique trends of this market. Jeff Vidler, president of Audience insights, and Jeff Ulster, chief content and technology officer for The Podcast Exchange, presented the full study on Wednesday at the RAIN Summit Canada in Toronto.

Familiarity with podcasts has remained high in Canada, growing from 73% in 2017 to 76% in 2018. Almost half of the Canadian population has ever listened to podcasts, edging up on-year from 43% to 45%. Monthly listeners account for 26% of Canadian adults and weekly listeners had an 18% share; in 2017 the rates were 24% and 15%, respectively. 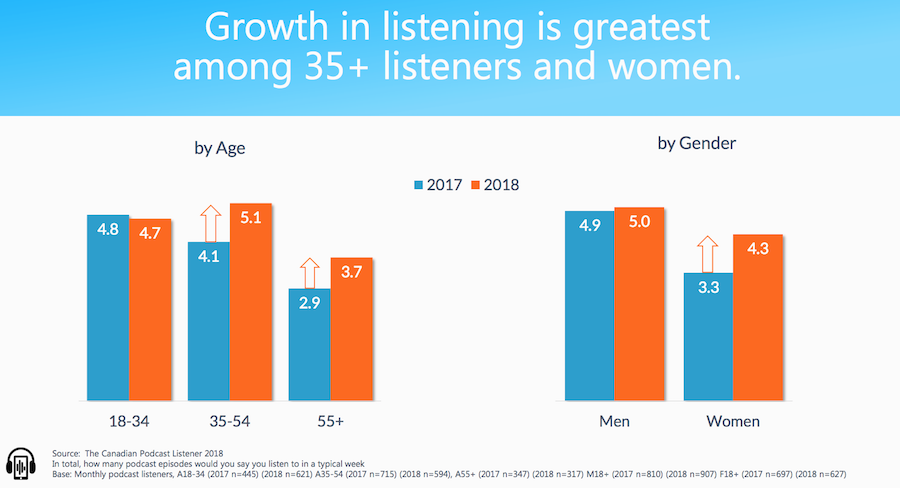 For demographics, Canada’s monthly podcast audience leans more heavily toward men at 59% and toward younger generations, with 52% aged 18-34. The monthly listeners also posted higher incomes and higher rates of university degrees. By geography, British Columbia had the most monthly listeners at 32%. The major cities also posted high proportions of people listening to podcasts monthly: Vancouver at 36%, Toronto at 34%, and Montreal at 25%. Although those are the common demographic profiles, the growth in listening is greatest among the over-35 listeners and among women.

Podcast listeners are putting more time into the audio format, with the average time of 4:31 hours per week, compared with 3:58 hours per week the previous year. Power listeners, defined as consuming at least 5 hours per week, grew their share from 27% to 31%. The portion listening for between 2 and 5 hours a week also grew from 26% to 29%. 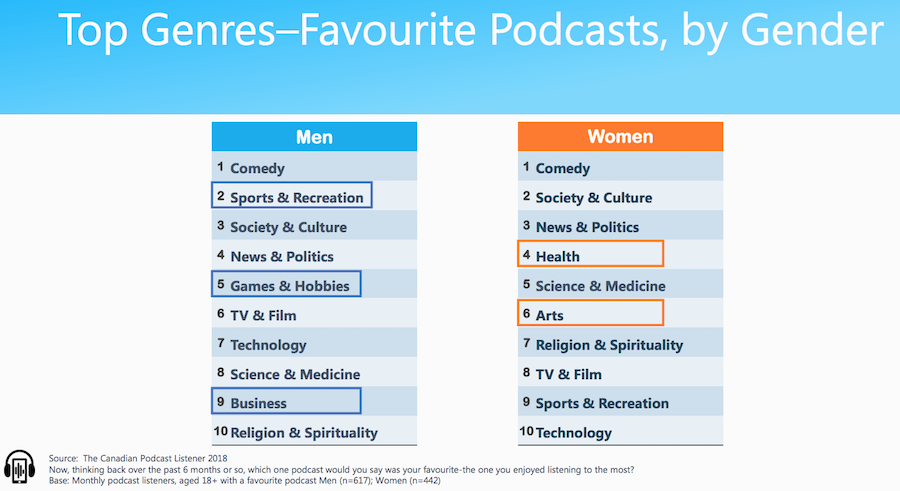 The presenters at the RAIN Summit noted that when listeners were asked for up to 10 podcasts they’d listened to in the past month and for their top two favorite shows, the sector faces a very long tail. The 1,534 monthly listeners named 1,831 podcasts, but only 546 of those shows were mentioned more than once.

The report closed with a deep dive on podcast advertising. Monthly listeners increasingly took action in response to ads compared with 2017. Forty percent looked to get more information based on an ad, 16% told someone else about it, and 13% made a purchase in 2018. More than half (54%) of the monthly audience took at least one of those actions. The more seriously a person follows podcasts, the more likely they were to react to an ad. Among the power listeners, 65% took at least one of the three actions. 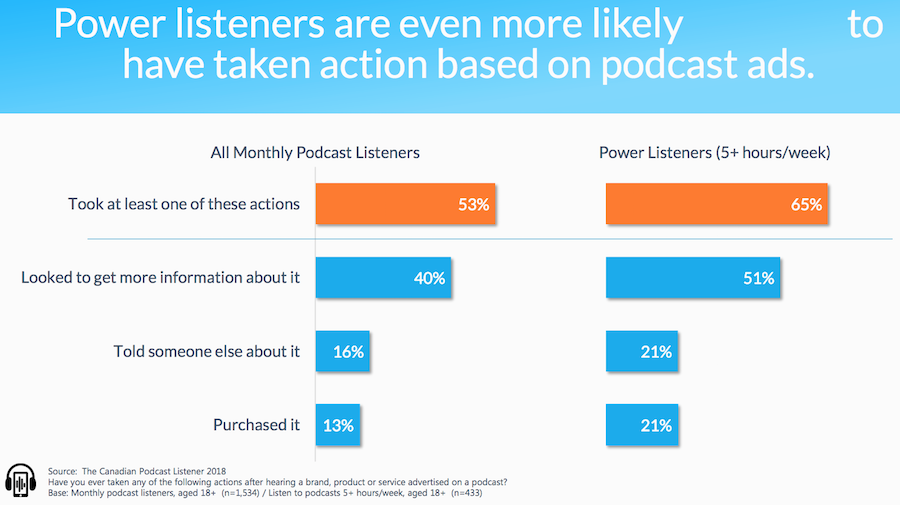 Despite the solid responses to podcast ads, not all brands are taking optimal advantage of Canadian audiences. Of the top eight advertisers that monthly listeners recalled hearing, two of them do not operate in Canada. Almost two-thirds (64%) of monthly listeners said they sought more information based on a podcast ad, only to find the product or service was unavailable in their home country.

Survey participants were asked about whether and when they actively try to avoid advertisement. Monthly listeners posted the lowest avoidance rates for podcasts (45%), while the 18-34 age group and the power listeners were even less likely to actively avoid podcast ads at 43% and 39%, respectively. The intimacy offered by host-read ads was the top reason given for paying more attention to podcast ads compared with other media. This was the reason for 56% of the monthly listeners and for 65% of power listeners.

The survey included two components, a calibration study of more than 3,000 people from the general Canadian population in May 2018 and an in-depth study of more than 1,500 monthly podcast listeners in June 2018. Both segments included adults aged 18 and up. 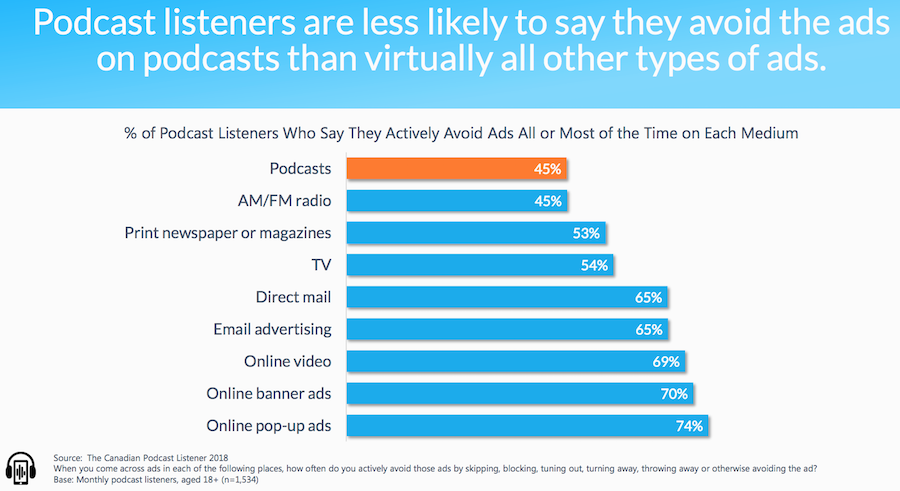