If podcast rankers reveal stagnation at the top levels of popularity (they do), Magellan AI’s monthly ranking of top advertisers shows the same characteristic. Looking at the just-released list of top 15 spenders in May, and comparing it to April, we see the same top five advertisers: BetterHelp, HelloFresh, ZipRecruiter, Amazon, and Geico. The order of that top five is shuffled a bit, but it’s the same five companies spending the most. In the illustration below, the green highlights indicate unique April leaders (they don’t appear in the May top 15). Blue highlights indicate unique May leaders that don’t appear in the April list. 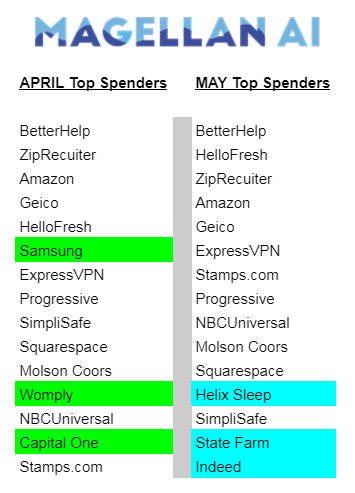 So: Five out of 30 spots, across two months, show unique placements.

Magellan also posts the always interesting Movers & Shakers list, which displays the top 15 advertisers by greatest spending increase from the previous month. Dell  tops that list by spending about a half-million more over the company’s $97,000 April spend. In its accompanying commentary, Magellan notes: “Since 1963, the US Small Business Administration has recognized the first week of May as National Small Business Week.”

See both May lists HERE.