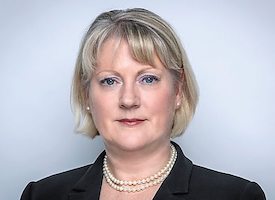 “Anne has been an inspirational leader,” said Hall. “She has brought real insight and determination in bringing change to the BBC. Her achievements at the BBC are many — she has ensured the BBC continues to innovate and deliver hugely popular services to the public. She has vastly improved the BBC’s efficiency to industry leading levels. She has led a transformation in the BBC’s working practices.”

“It’s been an honour to be the first woman Deputy Director-General of the BBC and I’m proud of what we’ve achieved since 2013,” Bulford said. “The BBC is an amazing organisation, with so many talented people. I feel I’m leaving the BBC in a stronger position and I’d like to thank Tony, my colleagues and especially all my teams for their contribution and hard work.”

The BBC had a big year in 2018, including hiring Jason Phipps as its first ever commissioning editor for podcasts and launching the BBC Sounds app.