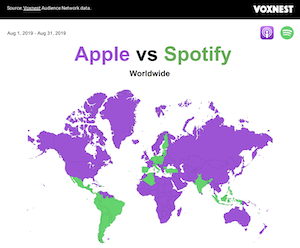 Voxnest has released its latest data tracking the international usage of Spotify and Apple as a podcast platform. In August, the Voxnest Audience Network found that Spotify was the more popular service in Portugal, Algeria, and Bulgaria. Apple reclaimed its lead in Romania.

According to Voxnest’s assessment, Spotify’s lead in Portugal may be the result of podcasting growth happening in Brazil. Forty percent of Brazilian Internet users had listened to podcasts in a May survey, and several of the most popular shows in Portugal are made in Brazil.

This shift echoes Voxnest’s previous prediction that Hispanic and Latinx audiences would see strong growth over the course of 2019.