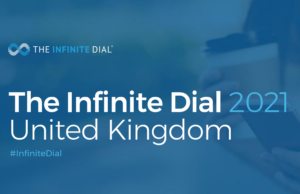 United Kingdom residents beat the U.S. when it comes to consuming online audio, and especially enjoys Spotify. Those are two of the many comparative analytics revealed today by Edison Research in the company’s presentation of the first instance of its Infinite Dial consumer survey brand focused on the United Kingdom,  Infinite Dial UK 2021. The study is supported by Bauer Media Group UK and Spotify.

Edison founder and president Larry Rosen narrated the slide presentation in an open webinar. The slides are freely available HERE.

Over 1,000 respondents participated in the phone-based survey, and they presented a profile of a territory with a robust uptake of online audio: 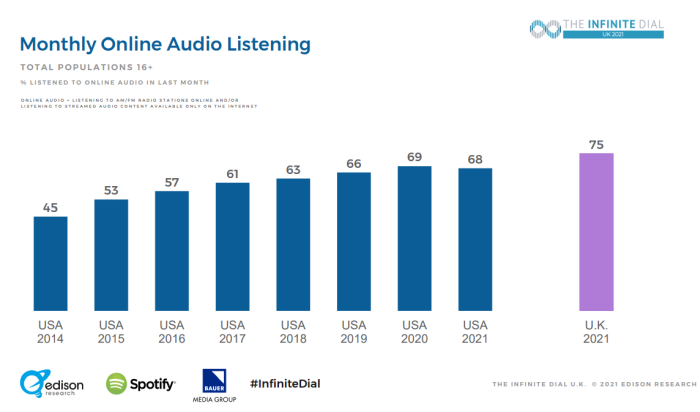 It’s not just the U.S. which is topped by the UK’s vigorous adoption of streaming audio, but Australia and Canada as well: 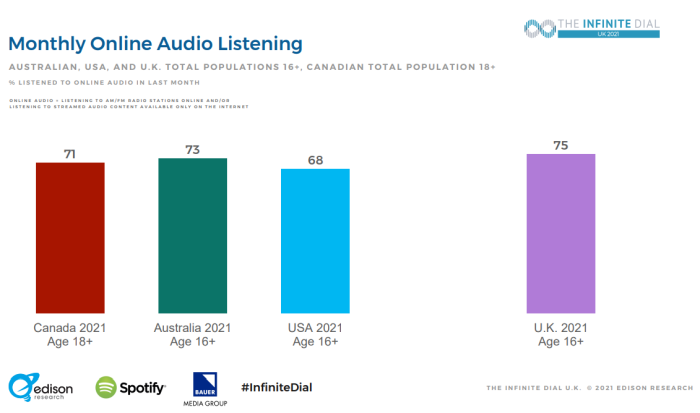 An advantage in Edison’s branching Infinite Dial project is the availability of comparative insights like those above. Today’s presentation was full of them.

In another question about online audio brands, the UK respondents were more aware of Spotify (71%) than of BBC Sounds (63%). Not that BBC Sounds is not the same as BBC, which probably enjoys near-universal awareness. BBC Sounds is a listening app for BBC radio and on-demand audio programming.

That recognition plays out in usage, as Spotify leads the online brand group in listening, ahead of both BBC Sounds and YouTube:

In podcasting, the UK profile is less basic awareness than in the U.S. (71% in UK vs. 78% in U.S.), and much less than the whopping 92% in Australia. But monthly listening is exactly the same benchmark as in the U.S. — 41%. Twenty-five percent of the UK listens to podcasts weekly, with the biggest slice of that pie being super consumers of six to ten shows per week.

Again, the slide deck is HERE.