Triton Digital has launched the Australian Podcast Ranker, the first of a (presumed) series of podcast reports listed on a new Triton web page. Introductory language on that page indicates that Triton is conceiving of other country-specific podcast charts.

In doing so, Triton joins a cluster of existing specialty rankers that include Podtrac (U.S., shows and publishers), iHeartRadio Top 100 podcasts, the iTunes show charts, among others.

The first edition of the Australian Podcast Ranker, which will be released in four-week reporting periods, starts with shows representing a few of Australia’s top audio publishers: SCA-PodcastOne, Nova, SCA-Triple M, SEN / Crocmedia, Australian Radio Network, News Corp Australia, Macquarie Media, and SCA Hit. That might seem limited, and it is for the first report, but representation on the list is open to any podcast publishers, the only requirement being an Australian audience. Triton’s ranking mechanism uses the IAB 2.0 podcast measurement specification, the leading would-be standard in the U.S. and elsewhere. Results are certified by the IAB Tech Lab.

The top show is Hamish & Andy, from SCA-PodcastOne Australia. See the top 30 below. The whole chart includes 100 shows.

Perhaps most interestingly in this first report is the SALES REPRESENTATION column, indicating zero independent agencies working on Australia’s top 100 shows (as represented in this chart). Each publisher reps its own shows, with apparent exclusivity. This might change as more publishers get involved, and overall the all-in-house model that pervades the ranker be an indicator of “early innings” of podcasting in Australia … unsuitable though that metaphor is, down under. 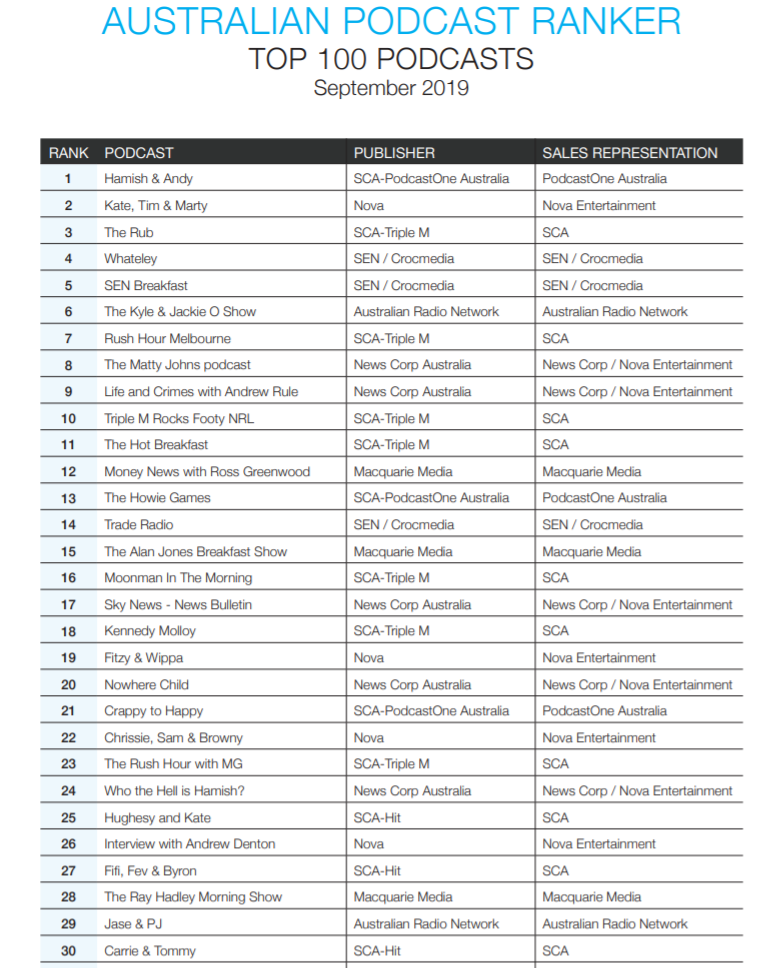