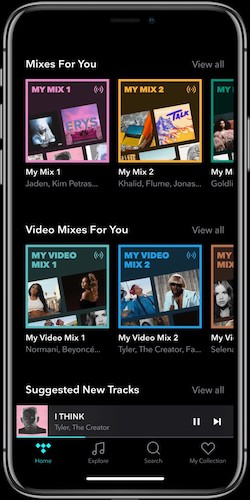 Tidal has added a new feature to bring a visual component to its music discovery. The streaming service introduced My Video Mix, a collection of up to eight video playlists. Each mix is themed to an artist or music style. The more often Tidal is used by a listener, the more quickly the platform will update with new content. According to the press release, the playlist is driven by an algorithm that is “influenced” by the company’s human curation team as well as by an indivdual’s own music tastes.

The company has also redesigned its interface to make it easier for users to access its library of more than 250,000 video items. There is now a dedicated Videos tab in the mobile app and in both the web and desktop versions of the service.

“From original content, to full-length movies and stunning visuals from artists in its unparalleled video catalog, Tidal provides its members with a well-rounded music experience,” COO Lior Tibon said. “My Video Mix and the app redesign reaffirms Tidal’s commitment to create a best-in-class experience for members.”