The Joe Rogan deal is about eyes and ears.

In fact, at its essence, the business of media and entertainment is pretty simple; sales dollars chase eyes and ears.

It’s always been that way.

TV blew up in the late 1940’s as people wanted to see Milton Berle. The Yankees played to empty seats as the third ranked baseball team in New York until Babe Ruth joined the team from Boston – good move Red Sox. Games were won, seats were filled and Yankee Stadium earned its place as the “house that Ruth built.” Netflix pivoted from sending DVD’s in the mail to delivering movies online just as broadband was exploding and then brilliantly added compelling original content like House of Cards.

Sirius Satellite Radio was fledgling until they brought Howard Stern on board and millions of people gave them Mastercard numbers.

That’s why the Joe Rogan deal is easy to understand – bring in a big name who can jet propel use of Spotify for podcasts. And SPOT investors seem to like it, pumping the stock by 20% last week and driving the market cap up by $1.7 billion in 23 minutes. 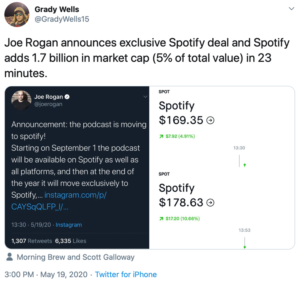 Spotify’s crack-like dependence on music licensing fees is still a money-loser and that’s why podcasts play such a key role in their future. As a modern form of radio, podcasts are a proxy for less expensive content and keeping people engaged on the platform. But that’s not all. Yes, Rogan moves them further along the path of Spotify as a destination to listen to podcasts but it’s the exclusive nature of the content that advances them down the road to loftier aspirations of ad targeting and monetization of podcasts.

That’s where this is going.

If your podcast is one of the 99% not scoring big downloads and giant dollars, pay attention because Spotify might turn out to be your best podcast friend and the path to monetizing your podcast in tandem with other pods.

Spotify’s intentions in the space are pretty clear. Founder Daniel Ek laid it out in an investor call which I annotated a few months back in this blog post. They are moving beyond simply being another music service and building a full-stack audio platform. That means audio listened to outside Spotify’s walls is missed opportunity.

This isn’t just about getting people to sign for premium services. Ek has made it clear they are focused on grabbing ad dollars from traditional radio. That’s why less than two years into the space, Spotify has assembled the only fully-integrated podcast company with all of the pieces at scale – hosting, distribution and advertising. Up to this point, most of the pieces have been siloed with different companies and in particular, ad sales have primarily focused on individual shows near the top of the charts.

Spotify’s intent is to do what they have done on the music side, aggregating significant audiences and monetizing them through data collection and ad targeting. The path is analogous to YouTube as an aggregator, distributor and monetizer for anyone who posts videos and has a substantial following. YouTube has the tools to drive audience, automatically insert ads and then send checks to creators of all sizes who put content on their platform.

Aggregation is certainly not a new thing. Network radio has been doing it for sixty years but today’s granularity of data changes the scope. if an advertiser wants a 30 year-old highly educated female listener living in the south, Spotify math wizards dice and slice the listening habits they have collected and there you go. Over time, with more ears listening, Spotify will be able to deliver those audiences at significant scale.

But wait, there’s more I

The Rogan deal is not just about audio. The YouTube piece of the Rogan empire has over 2 billion views and thus mighty compelling. We don’t yet precisely know what Spotify means by “vodcasting” but go ahead, take a whack at it. 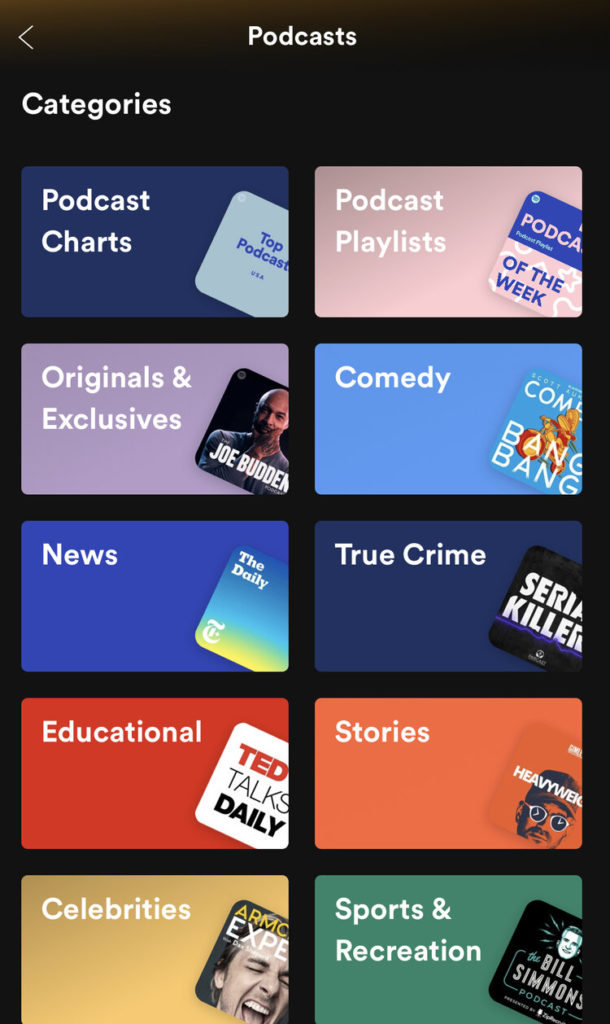 Much like Sirius/XM which runs ads in their talk programming, Spotify will double-dip running podcast ads even for those paying for their premium service.

Bloomberg broke some news late last week about Amazon Music and Amazon’s Audible moving into the podcast sector to chase Spotify. That’s a big deal that seems to have gotten lost in the Rogan news.

After the announcement that Rogan will only be available on Spotify (paid or free), there was handwringing in podcast circles about whether it should still be called a podcast if there isn’t a common RSS feed linking to all podcast players. Tragic! TV stations went through a similar grieving process for the old linear model of watching TV on Channel 7 and questioned whether streamed shows are TV shows. Audiences see no such distinction, it’s all TV, no matter the form of delivery.

The news about Amazon jumping in to podcasting and persistent Apple rumors about their own original content suggest more Rogan-like IP deals could be around the corner as the giants of podcasting jostle for exclusive water-front property.

The podcast wars are here.