Last week we demystified the commonly held belief that podcasters are fighting for share of ear in a sea of two million shows and that advertisers must sift through them all to find the right fit.

The big headline? A remarkable 44% of podcasts have produced three or fewer episodes. If we use an arbitrary filter of four or more episodes, that effectively reduced the much-touted two million podcast mark reached just a few weeks ago to around 1.2 million.

In partnership with Podnews.net editor James Cridland, we looked at a group of more prolific podcasters – those who have produced ten or more episodes. These numbers tell a very different story.

We explored the Podcast Index database, which closely tracks Apple Podcasts, and discovered that of the two million shows available, 720,000 podcasts have ten or more episodes, and 70% of them dropped at least one episode in the past year.

How about shows we tend to think about as daily or weekly? 156,000 (21% of the 10+ crowd) were active in the week we reviewed the data. That means of the two million podcasts out there, 8% have 10+ shows and a new episode in the past week.

156,000 may seem small, but it is not. It’s important to be mindful that 156,000 of anything is impressive. It reflects meaningful choice and is a tribute to the producers generating episode after episode of great and reliable content. Not an easy task. 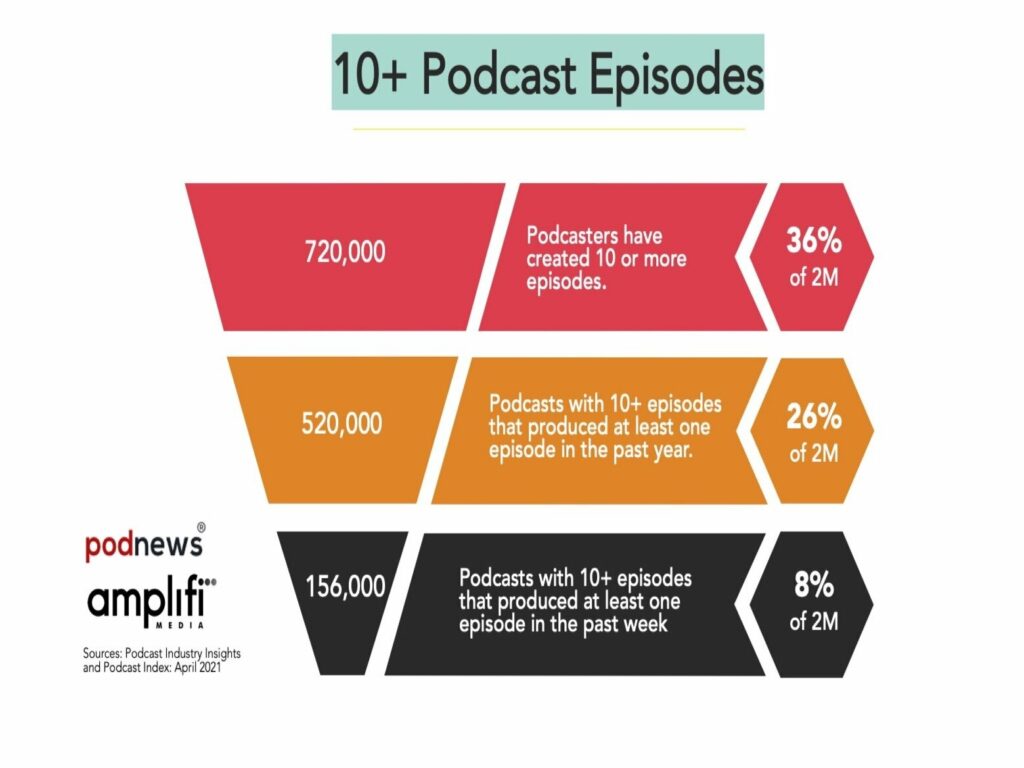 Why These Numbers Matter

The feedback to last week’s blog was largely favorable. For many, it confirmed that not all podcasts are equal. Sure, there are a few individuals who cling to the notion of a podcast-is-a-podcast. While that may technically be true (and we are not rendering an opinion as to whether one-and-done podcasts should be cleared out of the big pile o’ podcasts), we think a better understanding of all of the jellybeans in the jar offers value and perspective to those in our rapidly changing business — and those looking to throw a hat in the ring.

It is an overheated marketplace and data driven decisions, while not for everyone, can help frame the obstacles and opportunities.   When we look at a slice of the podcast pie, for example travel podcasts, it’s revealing and important to see how many titles are no longer in production.

This is not just a discussion for producers – our analysis is also helpful for marketers. Focusing on viable podcasts is a more productive conversation to have with advertisers and agencies. Pierre Bouvard, Chief Insights Officer at CUMULUS MEDIA | Westwood One, told me these insights make the space less daunting to potential advertisers. He said, “The two million metric did nothing but cause stress for brands and provide a good excuse not to advertise in podcasting. Advertisers can now zoom in to achieve audience scale by purchasing the largest networks and the most popular podcasts.”

Now we all know a bit more about the competitive set. The two million podcasts stat is real – but the types of titles making up the sum of the whole are different.

In media and life, there is something for everyone.