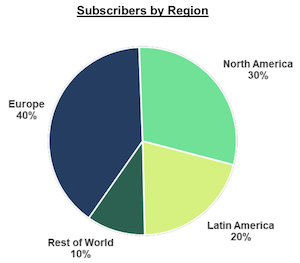 Spotify posted several notable increases in its fourth-quarter earnings report. Revenue, subscribers, and podcast interest were all on the rise for the streaming service over the course of 2019.

Spotify had 271 million total monthly active users in Q4, a 31% on-year increase. In the shareholder letter, the company observed that in addition to growing its MAU base, it has also posted improved retention rates in each of its top 20 markets.

The streaming service now has 124 million premium subscribers. That total marks a 29% jump from the year-ago period. Spotify said that Q4 2019 was its biggest net-add quarter to date and marked the fastest it had ever added 10 million subscribers.

Europe is still responsible for just over a third (25%) of Spotify’s total MAU, and accounts for a bigger 40% share of the subscriber audience. North America also has a big chunk of Spotify listeners, representing 27% of total MAU and 30% of subscribers.

Podcasts have been a heavy focus for the company over the past year, and Spotify said that more than 16% of its total MAUs engage with podcast content. Podcasts have also seen nearly 200% on-year growth in consumption hours during Q4.