Notably, Spotify is giving away the $80 device initially, allowing Premium users to get on a waiting list. Those accepted will pay only a $6.99 shipping and handling fee. (Which seems oddly parsimonious.) 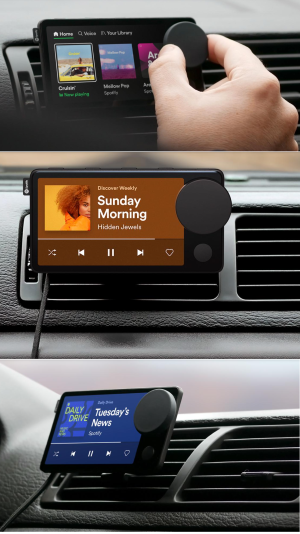 Car Thing is a single-purpose, dedicated Spotify controller-plus-mount which can sit anywhere on the dashboard, potentially obscuring the car’s physical radio. It is voice-controlled for basic features: “Hey Spotify, play my favorites,” for example. It has an old-school radio-style tuning knob for more exact control.

It is, in effect, a Spotify radio, inasmuch as it fulfills and even improves the ease of use which characterizes radio’s continued dominance in the car. In the recently released Infinite Dial 2021 (Edison Research and Triton Digital), consumer research showed AM/FM radio as the most used in-car audio source — 75% of respondents use it. In contrast, only 20% use in-dash audio entertainment.

We are also mindful of the valuable in-car commute. That 20-30 minute average slice of temporal real estate in the car is important to radio, and also to podcasting, which Spotify is pushing to users. If Car Thing takes off among Premium users, we can imagine it playing a role in luring listenership away from radio, and additionally away from dedicated podcast apps which people now use via their phones.

Part of Spotify’s roll-out pitch illustrates the extent to which the company is leaning into podcast listening and herding users away from the more expensive (to Spotify) music listening: “Four presets take you to your favorites. Change them anytime. They’ll always bring you the newest episode of podcasts and up-to-date news.” While shifting users away from music toward spoken-word content, the promotion of “presets” is another linkage to traditional car radios.

Will Spotify Premium users pay $80 for a dedicated narrowband device in the car? For a single user, the cost is worth eight months of subscription. Seems like a cost-benefit calculus that might give a person pause.

On the other hand, Spotify subscribers are invested in their Spotify music collections. It is a lean-in service that, over time, can represent a much greater value than the subscription price. Spotify has not rewarded that effort, or fulfilled that value, with effective smart control solutions for in-home speakers or existing in-car solutions for Android and Apple. In our view, voice-control of Spotify is currently terrible, and we have been mystified over the company’s failure in this regard. Car Thing is Spotify’s answer to our petulance. Giving it away to some extent (there is no info on how many will fly out the door during the offer period) is a smart move that might build positive feeling while enabling Spotify to responsively modify Car Thing into a final version.

Spotify serves about 160-million Premium subscribers around the world. Presumably Car Thing is English-only now, but that could change. One way or the other, Spotify is addressing a sizable and growing market. (See our comparison of Spotify vs Netflix subscriber growth.