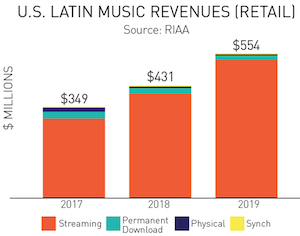 Latin music is seeing faster growth in the U.S. than the overall market, with streaming responsible for almost all of the genre’s domestic revenue. According to the RIAA, Latin music revenue grew 28% in 2019 to reach $554 million.

Streaming accounted for 95% of the total, thanks to 32% annual growth. Paid subscriptions generated 65% of Latin’s streaming revenue total for 2019. This segment grew 36% on-year to $344 million. Ad-supported on-demand streaming revenue rose 29% to reach $121 million. Digital and customized radio took the remaining portion of streaming revenue, growing in 2019 after a 2018 decline.

Compared with the RIAA’s 2019 U.S. music report, both subscription and ad-supported streaming are outperforming for the Latin genre. Ad-supported revenue was 23% of the Latin streaming figure, compared with 10% in the total report. The whole Latin market also grew faster than the broader U.S. market, and secured 5% of the domestic recorded music business. That’s up from a 4.4% share for Latin in 2018.