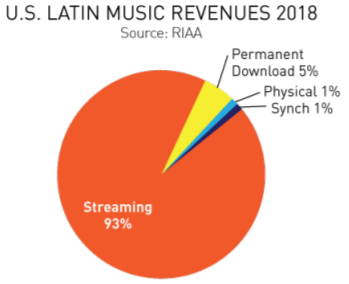 “Any conversation about the Latin music market starts with one word: streaming.”

The RIAA has released its 2018 report on the Latin music market in the United States. The genre continued to grow for another year, with revenue up 18% to $413 million. Latin music was responsible for a 4.2% share of the total U.S. market, but this style is a major success story for streaming.

Streaming generated 93% of all Latin music revenue in the U.S., up from 75% in 2017. Revenue from the format rose from $304 million in 2017 to $383 million last year. As with the RIAA’s full 2018 industry report, paid subscriptions are the top driver of streaming revenue. This channel saw 48% on-year revenue growth, reaching $239 million and securing more than half (58%) of the Latin sector.

Ad-supported streaming increased revenue by 34% to reach $91 million. That gave it a quarter (24%) of the genre’s total intake. Latin music posted a drop of 29% in revenue from digital and customized radio, a segment that includes Pandora and Sirius XM.