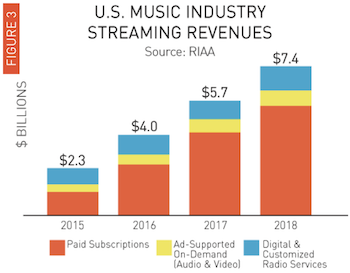 The RIAA has released its 2018 report, and the analysis includes several new firsts and milestones for the music industry. The year saw several important records logged in streaming music, which continued to be a top growth driver for music in the United States.

Streaming was responsible for 75% of the year’s music industry revenue, a portion that held steady from the RIAA’s mid-year report. The $7.4 billion from streaming showed 30% growth over the previous year’s total. The group noted that streaming accounted “for virtually all the revenue growth for the year.” 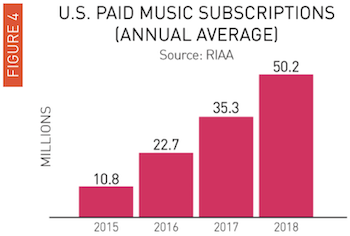 Subscriptions continued to deliver the bulk of revenue and growth for streaming. At $5.4 billion, subscription streaming is now responsible for more than half of the industry’s annual revenue total. The RIAA includes limited tier services, which offer paid music access with restrictions such as reduced catalog or fewer on-demand features, in its subscription revenue total.

Ad-supported streaming delivered 2018 revenue of $760 million. These sources posted 15% growth for the year, contributing an 8% share of the total U.S. music market. 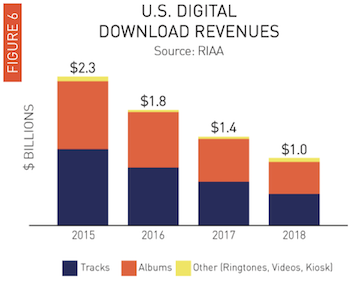 Digital and customized radio services, a category including Pandora, Sirius XM, and iHeartRadio, also had a strong year. Annual revenue for this segment exceeded $1 billion for the first time, with 32% growth bringing it to a total of $1.2 billion. SoundExchange distributions grew 46% to their own record high of $953 million, while other sources in the category generated $251 million in revenue.

While streaming continues to be the brightest star in the industry reports, digital downloads and physical sales continued their steady declines from the past few years. Revenue from digital downloads fell for a sixth consecutive year to $1.04 billion. Album downloads dipped 25% to $500 million and track downloads declined 28% to $490 million. The waning influence of downloads has seen this segment providing only an 11% share of the total industry revenue, compared with 2013 it had a 42% market share.