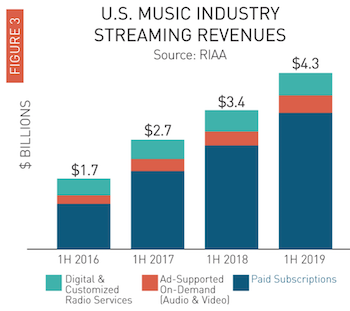 The RIAA half-year report points to new highs for the United States’ music market, with the sector on track to break annual revenue of $10 billion.

Paid subscription streaming delivered $3.3 billion in revenue, up 31% from the year-ago period. That result means subscriptions are responsible for 77% of streaming revenue and 62% of the total revenue figures for the half. Subscription revenue included $482 million from limited tier plans, which accounts for services such as Amazon Prime and Pandora Plus. 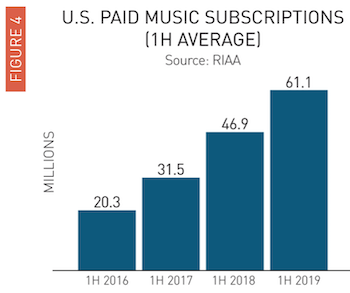 Ad-supported streaming revenue also grew, but remains a small sliver of the overall totals. This segment increased year-on-year revenue 25% to $427 million. It represented just 10% of the streaming revenue.

As streaming continues to dominate the U.S. music industry, digital downloads have reported corresponding declines in revenue. Digital download revenue fell 18% in the first half to $462 million. That included dips of 16% for individual track sales and 23% for digital album sales.

Physical product sales reversed a long phase of decline, posting 5% growth in revenue to reach $485 million for the first six months. These sales represented 9% of the total industry revenue during the period. The notable growth was vinyl album revenue rising 13% to $224 million.